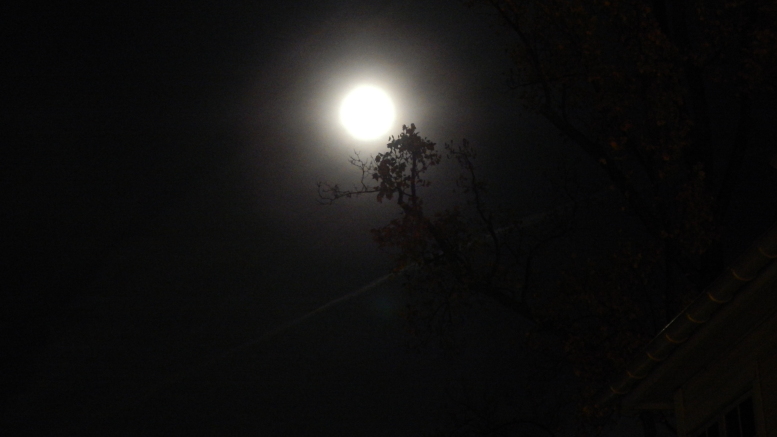 A full moon illuminates the sky while the Ghost Tours are conducted. Photo by Hannah Krauss

Every year, the Alpha Psi Omega Theater Honors Fraternity leads ghost tours through the McDaniel campus and the theater during the days leading up to Halloween.

Initially starting as a haunted house years ago, the annual ghost tours have become popular at McDaniel. Though this year inclement weather caused the tours to be canceled for one evening, students were eager to hear McDaniel’s spooky history.

“I definitely think it’s a tradition for McDaniel for Halloween,” says sophomore Laura Hawk, a member of Alpha Psi Omega. 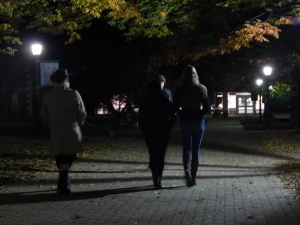 McDaniel students walking around campus during the Ghost Tours. Photo by Hannah Krauss

During each tour, the tour guide leads ghost enthusiasts past college academic, residential, and office buildings, such as Whiteford, McDaniel Hall, and the admissions building. The guides stop by different buildings and explain the eerie stories that took place there.

What makes these ghost tours perhaps a little different for the students is that these buildings are very familiar to them; some students currently live in the haunted dorms and others visit the haunted buildings daily.

In the theater part of the tour, people explore the theater with the tour guide, visiting the main stage, the costume shop, the green room, and other parts of the building. While they are there, they are spooked by apparitions, unexplained music, and appliances turning themselves on.

This part of the tour changes every year, explains Hawk. “We changed the route in the theater to make it a little different. We’re just changing it up a little bit, adding new effects and bringing back old effects, just to make sure that it is not the same from year to year.”

The ghost enthusiasts on the tours were told the stories of the theater’s three ghosts: Harvey, Dorothy, and Mr. Steve. According to those running the tour, however, these ghosts are not just stories. 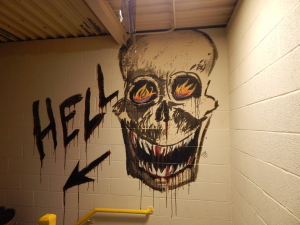 One of the many decorations set by Alpha Psi Omega. Photo by Hannah Krauss

Brandon Richards, sophomore and member of Alpha Psi Omega says, “There have been stories in the past of Harvey actually showing up during ghost tours within the last couple of years.”

Moises Miguel, a junior, agrees, “My freshman year when I went on the ghost tours, we were actually having a lot of static and cutting out of music that was not involved, and I believe it was a senior that saw a figure of Harvey walking around on the balconies.”

Other tour members told tales of ghosts preventing crew members from falling over balconies and described mysterious thumps that could not be explained.

But ultimately, the ghost tours present an opportunity for people to have fun on Halloween with friends, while learning a bit more about McDaniel’s ghost lore.