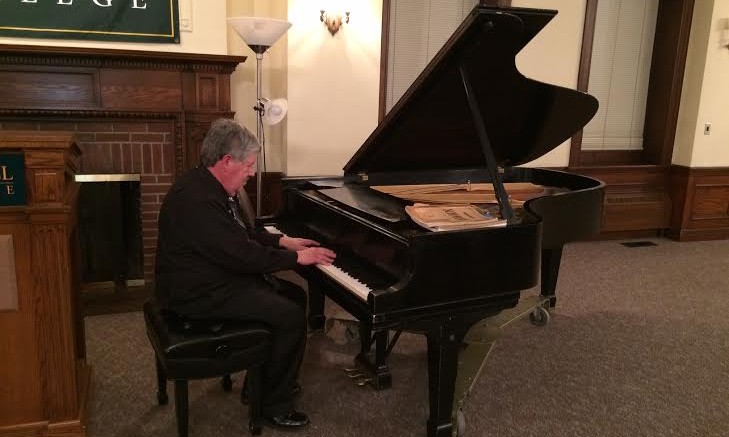 Robert Schumann, a celebrated composer of the Romantic era and a sufferer of bipolar disorder (known in the nineteenth century as manic depressive disorder), was the subject of the night’s lecture and performance. His life story was shared by Dr. Mazeroff, and Dr. Kreider performed the dramatic composer’s Fantasy in C Major, Op. 17.

Passion and tragedy dominated Schumann’s life. In addition to experiencing the symptoms of bipolar disorder – depression, mood swings, delusions, hallucinations – he bore the loss of four siblings and father, an injury to his hand that prevented him from playing the piano, abandonment by his piano teacher, a struggle to win the woman he wished to marry, and constant bouts of alcoholism. 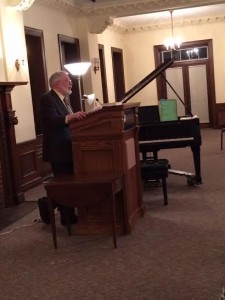 It is from these dark times of his life that the genius of his composition emerged, however. Dr. Mazeroff explained the phases of bipolar disorder; first is the depressed stage, which can act as a “nursery” for ideas and as a creative cauldron; next is the manic stage, in which the person with bipolar disorder has the energy to carry out his or her ideas that were formed during the depressed stage. It is thought that this is how Schumann created music.

With Schumann’s disease came extreme mood changes, and the composer brought these moods to life by creating what were essentially imaginary friends. He had the upbeat, manic Florestan – represented in Schumann’s compositions with a fast tempo, numerous crescendos and a hint of mischievousness – and the quieter, melancholic Eusebius – played as a sweet, tranquil melody. These characters are exposed in Fantasy in C.

Fantasy in C was composed in 1836, the year that Schumann and his wife Clara separated. Schumann believed he heard the music to this piece come from somewhere unknown, and was convinced the beautiful music was being revealed to him by angels.

The first movement of Fantasy in C features a busy, swimming bass part. The melody is dramatic and emotional: dark, minor phrases switch to lighter phrases and back again– almost as if Florestan and Eusebius are bickering.

Just as if Florestan won the first movement and continues on, the second movement is grand and played at forte, with a few touches of playfulness.

Movement three is quieter, an homage to Eusebius, lulling into a dreamy and peaceful mood. Its shy but impassioned melody flows into a soft end, which brings enduring applause from the audience. Dr. Kreider well deserves it.

After Schumann’s attempted suicide and eventual death in an asylum several years after, his music still lives on almost two centuries later. The composer’s genius and madness worked together in a fascinating manner that brought forth lasting masterpieces which will be studied, played, and listened to with admiration for centuries to come.

You can listen Fantasy in C Major, Op. 17 below.