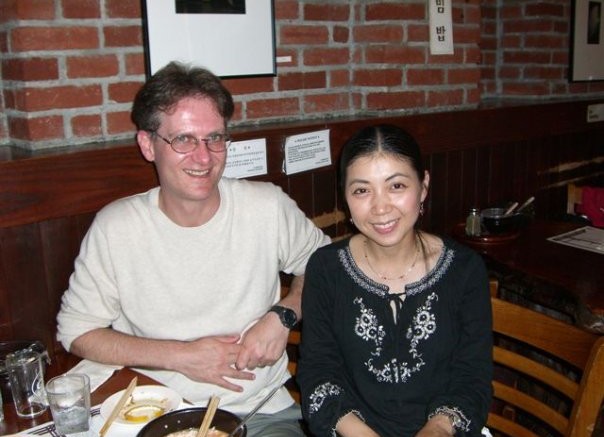 Dr. Trader and his wife Yuko.

“It was always my dream to live in another country,” says Dr. Robert Trader, Associate Professor of Communication at McDaniel College. After studying Japanese in college, he put this dream into motion and moved to Japan in 1984 to teach English as a second language in a private, conversation school, and he eventually co-founded his own school.

Originally from Cincinnati, Ohio, Trader has ties all around this country. He attended undergraduate school at Miami University in Oxford, Ohio and received his Master’s and Ph.D. at the University of Kentucky. Trader is a man who loves change and adventure. He has used this passion to drive him to travel, learn, and meet the love of his life.

Trader met his wife-to-be, Yuko, at his school in Japan. This is where things get interesting and their “Third Culture” begins to build.

“When she decided we could ‘kind-of’ date, she quit the school. We made informal plans, but she always brought her friends along, so I never thought anything would actually happen between us,” Trader says. “After three years of this, we didn’t talk for about 10 months.”

After 12 years of living in Japan, Trader’s parents were having health issues and asked him to come home.

“In 1996, I called Yuko to tell her I was going back to the U.S. She said she was going to miss me, so I told her she might as well come with me and get married! It was very informal and unplanned. When I asked, she said ‘ok.’”

The couple bought engagement rings together to show their commitment to the relationship. Trader met her entire family and received their blessing. He returned to the U.S. at age 35, and after a year-long wait to get her visa, Yuko joined him in the States at age 28. They got married on November 7, 1997.

Trader and his wife face many challenges due to cultural differences, but he explains how these aspects of their marriage are also the most rewarding.

“We had different culture expectations,” Trader says, “so of course there was conflict. This would have been true regardless of what part of the world in which we were born. We left everything in Japan and started fresh when we got married in the United States. We didn’t have jobs or even a steady place to live.” He says that in the first year of marriage she would often ask him to act more Japanese while living in the U.S. “After 12 years of being treated as a foreigner, I was not going to have that in my own country. She also had to make compromises and adjust to where we were currently living,” he explains.

Some challenges they have encountered are fairly universal – trials faced in all different cultures. “It’s weird, but I don’t have this need to be with people. I am an introvert and I enjoy my alone time. It’s funny because Yuko is the total opposite. She used to try to drag me along to her social functions which never worked out too well because she would be buzzing with energy and I would be totally exhausted.”

Trader and his wife have a very unique take on culture now. He explains that she’s not a very typical Japanese person, just like he is not a typical American. They partake in something called “Third Culture Building.” They celebrate and live their lives, taking things from both of their cultures.

For example, they celebrate Thanksgiving, but add a Japanese touch to the food. They mix both languages, too. He explains that it’s not really a conscious compromise, but more of a natural way of life for them. 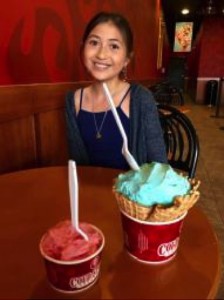 “In about the tenth year of our marriage, someone approached us to be in a study that would become a book about intercultural marriage. Until that time, we didn’t even think of the fact that we were came from different cultures or races. That wasn’t how we defined ourselves. That was something that was only ever brought to our attention by others.”

They have an 11-year-old daughter named Jade. She perfectly embodies their Third Culture Building, as she has many different character traits inherited from both of them. She is happy enough to be social like her mother, but also enjoys her alone time like her father. “Being biracial, we don’t define her or our family like that; it doesn’t even enter our minds much. She just is who she is.”

Trader explains that he is fascinated with learning how people live their lives. “If we only have one life, I want to live my life to the fullest. I don’t want to constrain my life by my culture. That’s why I travel. Culture has always been a fascinating factor for me. I respect culture, but I believe we can transcend culture, that we don’t have to do things because that is the way they have always been done, and that culture as well as each individual is always in the process of becoming. I want to have the complete range of human experiences, and so I love change, and I love things that are new. That is very rare for people of my generation, maybe. But you’ve got to keep moving on!”