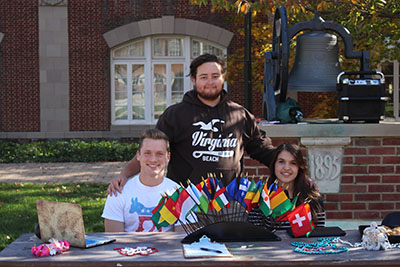 “What do you know about Francophone culture?” McDaniel’s French Club, with the collaboration of the Department of World Languages, Literatures, and Cultures, put together a week dedicated to introducing Francophone culture to McDaniel.

French week took place from Nov. 4 to Nov. 9 on McDaniel’s campus. As a liberal arts college, it is very important that students are introduced to different cultures, and it is good to see different student organizations make sure this happens.

Each day consisted of a different event that gave students a feel of the culture. The events included a cheese tasting, an afternoon of French cuisine, a conversation hour, a chalk-drawing contest, and a study abroad in France session to conclude the week.

“The Chalk drawing contest and cheese tasting events are recurring traditional events and staples of French week, and it would not be French week without them” added French Club President Jimmy Calderon.

The thought process behind this week is to have between four to seven events that represents as much of the Francophone culture as possible, though it is difficult to cover all of it in a week, and as such events are chosen based on importance.

When people refer to the Francophone culture “a lot of people think just of France, but there’s actually so much more to it” said Jason Swartz, the Treasurer of the French Club. “There’s the French influence in the Caribbean, Haiti, and a couple other islands, in the Indian and Pacific Ocean, and a lot in Africa, especially West Africa” Swartz continued.

The starter event for the week was the traditional cheese tasting, which took place outside of Englar Dining Hall from 11 a.m. to 1 p.m. “There are three things that make you French: cheese, wine, and bread” said Calderon jokingly. Swiss cheese, goat cheese, and brie, crackers, sparkling cider were all provided for students to try out during this event.

Calderon stated, “It was very successful because of the location, but also because it’s a traditional event of French week so people know about it”.

The second event was an afternoon of French cuisine. This event took place in the French House at 2:30 p.m. Freshly made crêpes and quiches were made by Lucile Oge, the French House Director. A traditional French game, la pétanque, was also played during this event.

The third event was a conversation hour held in Casey’s Corners. This was no different than the normal conversation hours that the French Club holds on the same location. During this hour, members of the club and everyone in attendance discussed a wide range of topics regarding the Francophone world while enjoying pastries.

The second to last event was a chalk-drawing contest, also traditional of McDaniel’s French Week. This event was created 4 years ago and has been a part of French week since. The contest took place in Red Square, and though the drawings can no longer be seen you can still admire them here. Though there were many amazing drawings, only three winners for this contest were chosen: the artists of the musician Stromae, the rat from Ratatouille, and Van Gogh were amongst the top three finishers.

The final day was an event to talk about studying abroad in France. Two alumnae, Clarissa Balint, Class of 2016, and Erin Chinery, Class of 2015 spoke about their experiences. Both Balint and Chinery joined the TAPIF (Teaching assistance program in France) program after their graduation from McDaniel.

The sessions were held through Skype, as none of the alumnae were able to travel to McDaniel. This allowed for students to ask questions and get a clear understanding of opportunities post-graduation. Anyone who has studied French in college can apply to join TAPIF.

It cannot be stressed enough how important French week is on McDaniel’s campus. This event occurs around the same time every year and is worth checking it out next year.

A Week of Allies