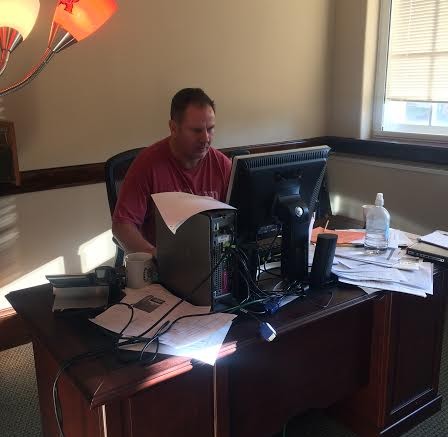 Professor Nigel Burdett has only taught at McDaniel College for two years, but his real-world stories and experiences are already leaving a lasting impression on business students.

Burdett worked the majority of his career in the business world. After retiring, he decided it was time to give back and spread his knowledge to eager college students. Most students gain respect for him right away because of his impressive resume. Given his success, Burdett can give an example to the students to look up to.

Born in Chesterfield, England, Burdett’s lifetime goal was to play professional soccer. He came up through the ranks at Sheffield United and was competing for a chance at the first team until he blew out his knee at age seventeen. He was then recruited to play soccer in America. He had many options, but picked the University of Maryland because he had another friend that was attending school there.

On the soccer team at University of Maryland, Burdett played sweeper and was a three-time All ACC conference player and a first team Academic All-American 1990.

“The ability to pursue an education while playing a sport influenced who I am today. I am forever indebted to the University of Maryland for the incredible opportunity they gave me,” says Burdett.

After finishing at Maryland with a degree in business and industrial technologies, he went into the work force. He always tells his students a funny story about his first job out of college: he got a job at Kellogg’s, and thought he would be in the office working on strategy and business ideas. His first week on the job, he was told to put a Tony the Tiger suit on and go to a grocery store to do some marketing.

Burdett says, “I was running late and started speeding down the highway to get there. Next thing I know, I am pulled over on the side of the road with the Tony the Tiger suit on. The cop thought it was funny, and let me off with a warning.”

When asked why he decided to start teaching, Burdett answered, “I always had a keen interest in academia from my time at the University of Maryland. The opportunity to engage and challenge tomorrow’s future leaders is more rewarding than anything I’ve accomplished in the business world.”

Not only successful in the business world but in the academic world as well, Burdett earned his Master’s Degree in Business from John Hopkins University.

McDaniel students who are interested in marketing, entrepreneurship, management, or business in general should consider taking one of Burdett’s classes.

An Evening with Wally Lamb