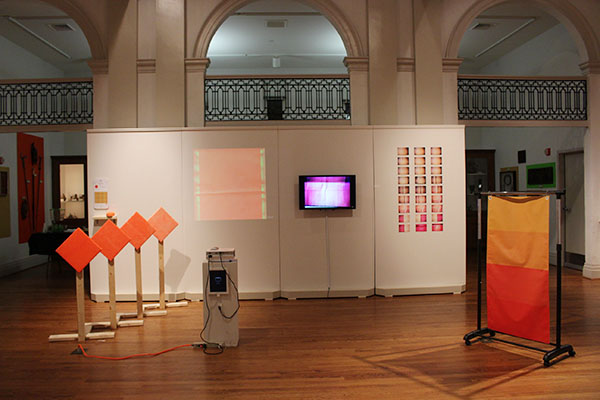 A front view of the exhibition. Photo by Genna Weger.

The Eighth Biennial Faculty Exhibition is taking place in The Esther Prangley Rice Gallery of Peterson Hall from Nov. 22 to Dec. 16 and is sponsored by the Department of Art and Art History at McDaniel. 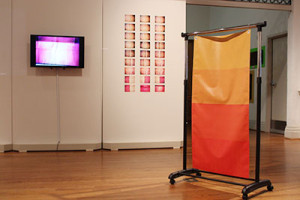 “Naptime on a Summer Day” by Chloe Irla. Photo by Genna Weger. 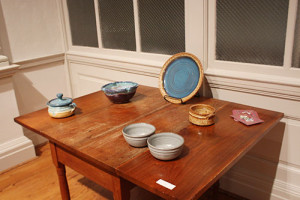 This exhibition is a rare opportunity to see the range and depth of works by select McDaniel faculty members. Calahan expresses his passion for photography. He says, “In this show, I plan to display iPad photography in pursuit of chaos.” 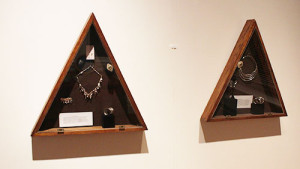 “Directing bodies in space is an exciting adventure in kinetic translation: lithe mass in lyrical motion inspires changing scale in sculpture, overlapping planes and sinuous lines in the rhythmic choreography of metal.  Every hammer stroke is part of a conceptual dance that takes place only once in the confluence of time, space and energy.  Then it passes.  This handmade work is one of a kind just like you are.  I dance with hammers!” Van Hart explains. 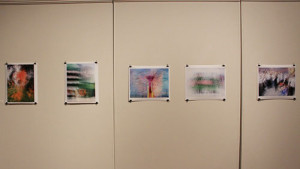 In her first display, the intriguing design of the necklace is so intricate. Van Hart explains, “The Savannah necklace was inspired by the Spanish moss hanging on a harry lauder walking stick bush outside of the presidents house of

Savannah College of Art and Design. I took photographs of it and I drew looking right at it. It’s kinetic and moving all the time, this is the romantic look of the old south. I figured if I use reticulation and granulation I could capture that look.” She uses this technique time and time again for other pieces she creates.

Every display was very different and unique in its own way, using lots of color and shapes and showcasing different artist with very different visions. Each piece took months or even years to finish. Chloe Irla concludes about her work, “This was an ongoing project that has taken me four years to piece together.”

SKEPSIS: Where Science and Art Meet