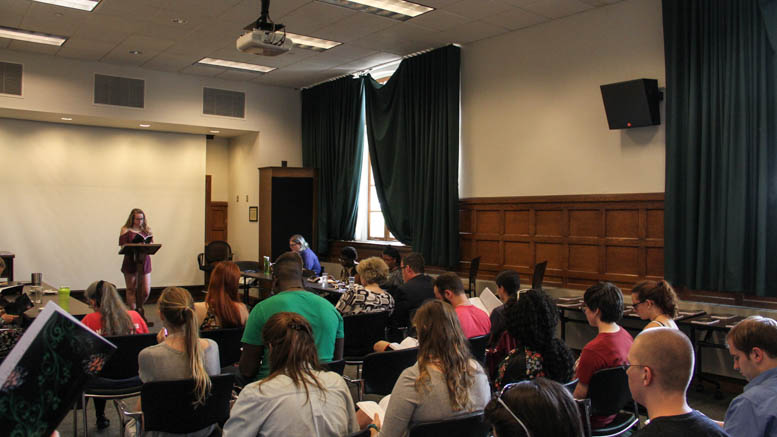 Students, faculty, and staff gathered for the unveiling of Contrast on April 27. Photo by Shane Braden.

Spring is here, and the newest issue of Contrast, McDaniel’s literary magazine is, too!

After attendees were given time to get food and refreshments, students read some of their work.

Among these readings was a poem entitled “The Bathroom of an Exxon Station Somewhere Between Houston and Denver,” written by Andrew Tyler. After reading his poem Tyler later explained that he enjoys writing because of the freedom and stylistic choices that it allows one to make.

The spring 2017 issue is 149 pages long and sports a black cover adorned with a floral design, as opposed to a selected photo from the art submissions, like in recent years. Inside are many different types of work, including fiction, nonfiction, poetry, and art.

In fiction, Marya Topina won first place for “Angel,” while second place was awarded to Katy Kissel who won for “The Gift.” Kaiijaii Gomez Wick came in third for “The Banging in the Pipes.”

Katy Kissel won first place in nonfiction for “Before He Turned Fifty,” Madison Gamble was awarded second place for “Waterlogged,” and Jazzy Williams-Smith was awarded third place for “Molly”

In poetry, Kaiijaii Gomez Wick won first place for “why i am not a christian,” while Jimmy Calderon was awarded second place for “Promiscuity,” and Andrew Tyler won third place for “The Bathroom of an Exxon Station Somewhere Between Houston and Denver.” Kyle Granger received an honorable mention for “Shots”

Rachel Sentz was awarded first place in art for “Sea Vortex.” Mei-Le Apalucci won second place for “Run Away,” and Samantha Wilson won third place for “Sorry, Pardon Me, Didn’t See Ya There.”

The editors of the 2017 issue of Contrast are proud of this year’s magazine. The co-Editors are Ema Barnes and Kailey Rhone, Jimmy Calderon is the Outreach Editor, and Jazzy Williams-Smith is the Design & Layout Editor. Contrast’s advisor is Dr. Kate Dobson. In total, the editorial board of Contrast includes Chase Bushman, Jimmy Calderon, Katy Kissel, Rachel Sentz, Howard Smith, Marya Topina, Jazzy Williams-Smith, and Nathan Wright.

Copies of Contrast are available at various locations around campus free of charge. 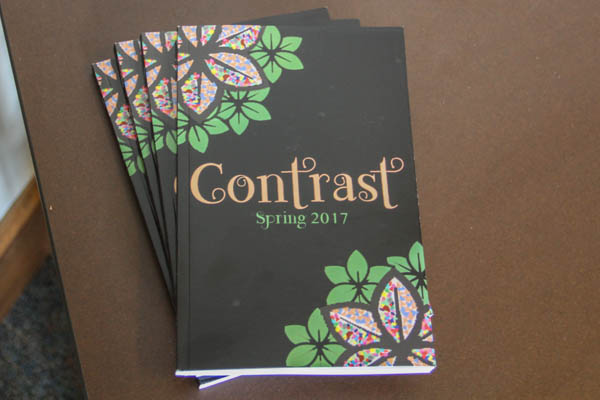 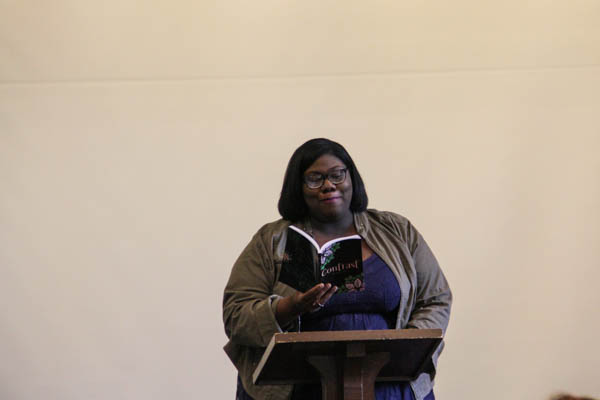 Jazzy Williams-Smith recites one of her works. Photo by Shane Braden.