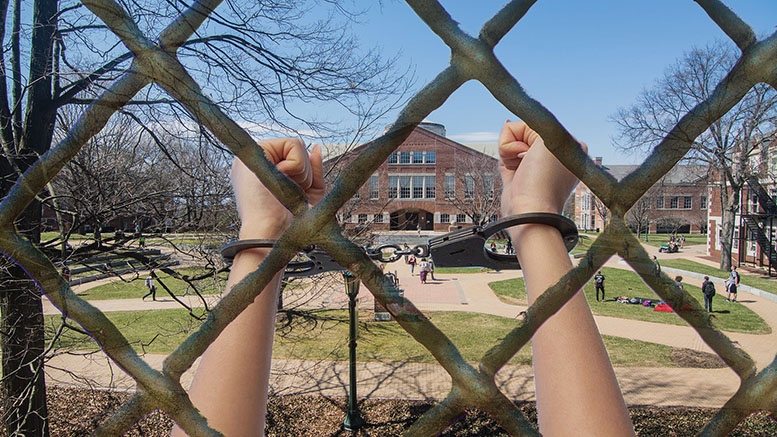 McDaniel’s hard-fought war on sex, alcohol, and pornography finally came to a close Monday. After eight months of bureaucracy and almost violent protests, McDaniel put its foot down and banned all pornographic paraphernalia and sex from its premises. Any students caught with such materials during mandatory room checks were summarily expelled.

“The following dip in enrollment has absolutely nothing to do with it,” say Campus Safety officials.

Student outcry was surprisingly subdued, though it is unknown whether most of the students are simply prudish or too embarrassed to step forward. Only a few took to Red Square on Saturday in protest, armed with bottles of booze and… unclean things. None of these protestors, as far as the administration’s records show, are students, nor are they otherwise employed by the college.

In an apparently unrelated issue, Rouzer Hall has been abandoned. No students have been seen entering or leaving since “The Purge,” as it has come to be called. Occasionally, a terrible screeching noise has been heard from one of the third-floor windows, but no other signs of life have been found.

Residence Life implores all students and staff to refrain from breaking through the barricaded doors and windows. “The last one who entered barely managed to escape with their limbs,” states a member of the Wellness Center, “and the Wellness Center is not equipped to treat injuries incompatible with life.”

So far, while no students have come forward with their opinions on the matter, the Free Press has received many angry complaints about The Purge. It doesn’t even make sense, really; we don’t have anything to do with this purging of pornography. If you want to complain to someone, try Campus Safety and Residence Life.

Writer of the Week: Gwendolyn Brooks

Thirty Years of Tears and Fears

Writer of the Week: Robert Frost