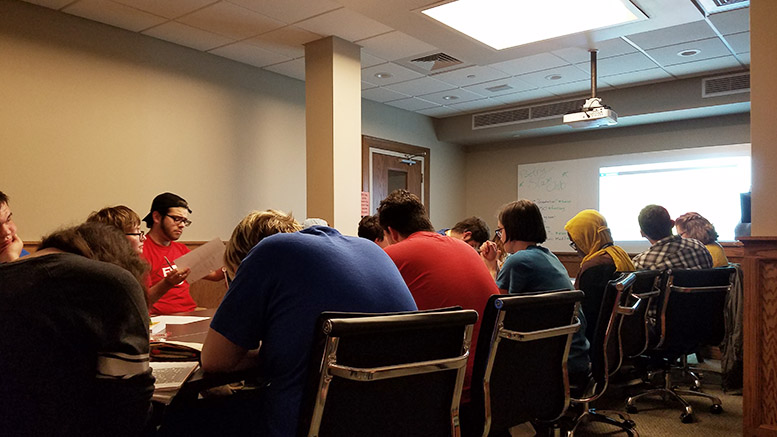 “I brought slam poetry from my home, Chicago, where I competed in the Louder Than a Bomb slam tournament,” says Boyle, a McDaniel sophomore. “People I know from here share Facebook videos of slam poems that move them, and there’s already a strong writing community on campus, so I thought that opening a safe space for a new type of expression would do well on the McDaniel campus.”

The club aims to introduce slam poetry to community members, students, and faculty on the Hill by hosting weekly writing workshops, sharing online examples of slam poets, and of course, holding slam poetry events and competitions. The group meets on Mondays at 8 p.m. in Hill Hall room 208.

“It’s going to be a community building learning experience for all who choose to participate, so anybody that hasn’t tried slam poetry before doesn’t feel left out or behind,” Boyle explains.

The advisor for the first ever Poetry Slam Club, Kathy Mangan, English professor and Joan Develin Coley Chair in Creative Expression and the Arts, is an established poet herself. She shares Boyle’s enthusiasm, adding that it’s “an exciting initiative and a good supplement to the Contrast literary magazine already present on campus.” She hopes that the club will attract a diverse group of students and is looking forward to seeing where it goes.

And with two dozen prospective members showing up to the first meeting last Monday night, it seems the club is already building a solid foundation. Boyle and her officers, vice president Gianna D’Avella and assistant to the vice president Madison Konski, were pleased with the huge turnout.

This first meeting featured a slam poem by Kanye West, as well as a tutorial for writing an “I Am” poem. Students were instructed to write several basic facts about themselves, rewrite each one in an abstract way, and then rearrange each phrase to create a poem. Many people shared their work to the applause and support of the audience. Whenever a particular line or phrase stood out to the audience members, they showed their appreciation by snapping or softly clapping. The room brimmed with creativity and a shared love for their craft.

D’Avella and Konski are also sophomore students. They and Boyle have big plans for the club during the next two and a half years of their college careers.

“Beyond this fall, we hope to continue a similar model and host a slam each semester, and possibly do some outreach to more of Westminster like the Carroll Arts Center and the high schools. We’re also considering guest speakers as an option for the future,” says Boyle.

In addition to weekly workshop meetings, the club will perform for the McDaniel and Westminster community throughout the semester. The first event will be Slam at Sunset on Friday, Sept. 22 at Harveystone, beginning at 6:30 p.m. The first slam competition, featuring judges and prizes for the poets, is tentatively planned for Dec. 1.