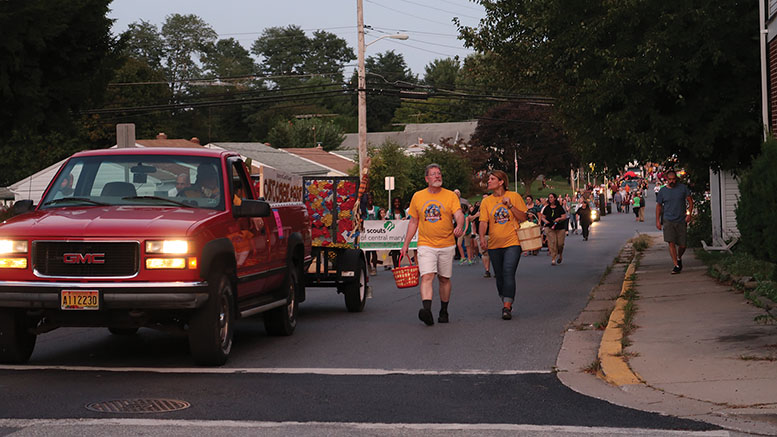 Westminster residents rounded the city in a parade that kicked off a weekend celebration of the 39th annual Fall Fest on Thursday, Sept. 21 at 7 p.m.

The parade is yet another festivity of Fall Fest, Carroll County’s largest community event that seeks to unite the city of Westminster and spotlight local organizations serving the community.

From fair vendors, to rides, to food, many events were available for individuals to attend. However, hundreds of residents stepped out of their doors to watch large, colorful floats and numerous volunteers walk around the center street. Westminster local Susan Humphries, who has attended the parade for over 15 years, shared, “It’s nice to see the bands from different schools, and there are so many people out!” Another resident John Daigle agreed saying, “It builds the community. It brings everyone together to have a good time and celebrate the fall.”

Schools, clowns, churches, advocacy groups, and other organizations were represented in the parade; and over 40,000 people gathered to watch them walk. Assistant Director of Westminster Recreation and Parks Heather Mullendore stated, “We have a lot of community organizations, non-profits, and businesses that participate in the parade. A lot of the organizations come with flyers, handouts, and candy to advertise to the community.”

In particular, eyes were on four local charities selected by city officials for fundraising and benefits. This year, the featured organizations included Tender Care Pregnancy Consultation Services, Westminster Lions Club, Human Services Programs of Carroll County, Inc., and Girl Scouts of Central Maryland. Mullendore continued, “It’s a good way to get word out about different services that we have to offer here in Carrol County.”

Behind-the-scenes, months of preparation were involved for setting up the parade route, which commenced at Monroe Street and Pennsylvania Avenue and ended at East Middle School. For instance, the Department of Recreation and Parks coordinated with the city and state highways to shut down roadways, and set up emergency preparation systems.

Also, advertising for the event is done largely on social media sites, and volunteer applications were first put out in July. On the Fall Fest Facebook page alone, there are over 3,000 followers – some of whom are parade volunteers. One volunteer was McDaniel College Senior Sisanda Marolen, who joined a cultural float representing the school’s Africa’s Legacy Club. She stated “I was asked to participate and represent a part of Westminster that people may not immediately think of at first – McDaniel College.”

Whether to volunteer at the parade or to just enjoy the festival, residents shared a night where the city came together to applaud one another. As expressed by resident Humphries, “Everyone is so happy and nice. Everyone is just here for a good time – and leaving all their troubles and craziness behind for one night.”