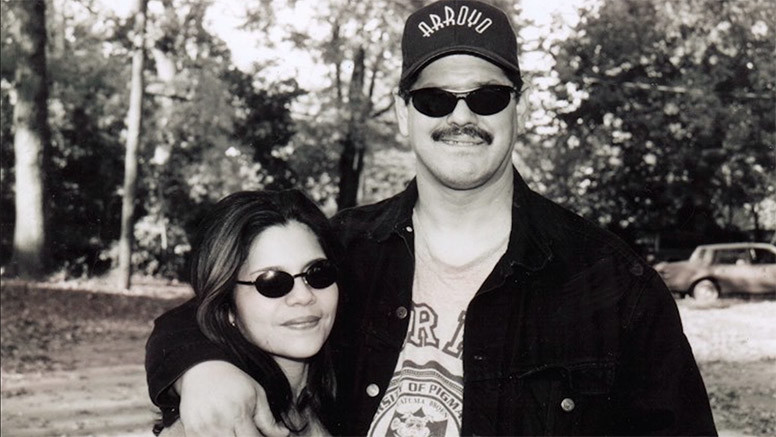 When I was seven I lost my father to colon cancer. My goal for telling his story is one, to establish my father as a real person and two, to raise awareness on cancer prevention in hopes of preventing other families from experiencing my loss.

My recollection of my dad is that he was strong, funny, and even corny at times.  As mom tells it, he was charming, charismatic, confident, very suave and quite romantic. His motto, “live life to the fullest, don’t deny yourself the simple pleasures.”

My parents met in late summer 1987 in New York City.  One of mom’s coworkers had tried to introduce them over the course of three months.  Since my mom was recently divorced, she was too busy raising my sister and had no interest in meeting anyone. Unbeknownst to my mom, the coworker had described my mom to my dad.

One day as she ran to grab an opened elevator, he immediately recognized her. Dad proceeded to introduce himself.  Mom noticed his voice right away. He had a deep, relaxing voice that grabbed her attention. When she turned to look at him she felt so small, as my mom is relatively tiny compared to my dad. Needless to say, dad became immediately infatuated with her and made it a point to get to know her better.

That day he would ride her train all the way to her stop. It turns out that he did not live in her area but commuted an hour in the opposite direction from where he lived to have more time with her. The following day, he would ride her train again. This time he gave her a Walkman and a cassette.  He had been up all night creating a compilation of his favorite songs, and that’s when she knew something could develop.

Fast-forward ahead, my dad had already proven that he was a great father.  He had a son of his own and had taken it upon himself to provide for Mom and help raise my sister while she finished school.  It did not take long before they married.  Not long after my brother was born and several years later I too became a part of the happy family. I wish it could have stayed that way.

While I have painted a great picture of my father, he was not perfect. In fact, he battled many demons. Much like his many brothers and sisters, he had bad habits. They smoked, drank, and ate in excess whenever possible as poor families do when fear of not having enough to eat is a possibility. Ultimately, while these were bad traits, it is not the worst thing he did. Since my dad was surprisingly very athletic, doing bike tours with my mom or playing racquetball, his biggest vice was believing he was invincible.

He was in fact not invincible. My dad’s family would later learn after his death that they had a high risk for colon cancer, which is known as familial polyposis. Statistically speaking most people should not have to deal with colon cancer concerns until their 50’s.  But in some cases, like my father who was in his 40’s, bad habits can lead to early development.

In my father’s case, no one would have been able to tell externally what was happening to him internally. There were no signs. The only reason we found out that he had cancer was because he sustained a serious leg injury that required surgery. After surgery, he developed a staph infection in the hospital.  Once the infection was gone, he continued to deteriorate. Further tests revealed he had stage-five colon cancer. I’ll reiterate: he had stage five cancer and there were no previous signs.

To speak plainly my dad had no chance. Statistically, radiation does not help in any capacity for people with that stage of cancer. We tried anyway. Being so young in the early 2000’s, I saw his body shrivel up; people had to carry him from room to room, and in the end, he was not strong like he used to be. In November 2004 my dad succumbed to cancer. I remember I had fallen asleep next to him unaware of the seriousness of the situation. I never got a chance to say goodbye.

Things could have been different. Today many people do not seem to place enough importance on themselves and their health. It is a fact that colon cancer is preventable. My message today is to bring colon cancer awareness to the forefront.  I want to urge people to take their health seriously. According to an article from The Guardian, from studies in the UK over 46 percent of people have their cancer diagnosed too late. Research suggests that only five percent of cancers are hereditary.

That means the non-inherited causes of cancer, the lifestyle choices we make, the foods we eat, and our physical activity have a direct impact on our overall cancer risk. DO NOT treat your body like it’s invincible; eventually our bodies will retaliate against us. Live your life with a healthy balance.  Listen to the signs and symptoms of your body. Talk to your doctor and get checked.  I turned 20 this past May, and I made sure to get checked because of my family history. Don’t be a statistic.