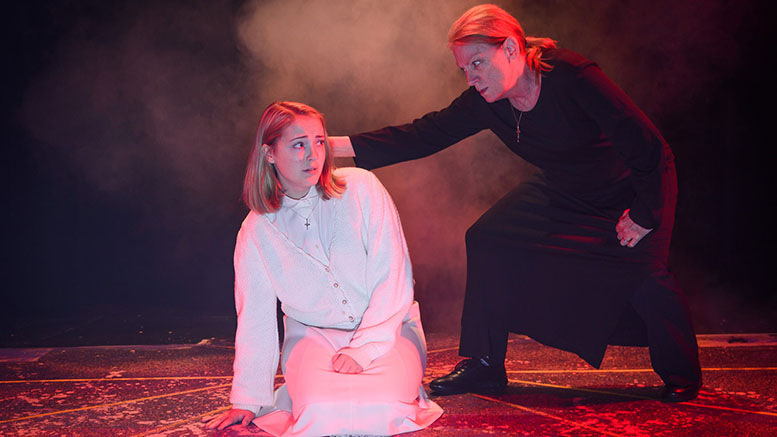 McDaniel’s Theater Arts Department is back for the second show of the semester, “Carrie: The Musical.” The show was directed by Josh Selzer, an alumnus and art director of McDaniel College, and ran from Nov. 15 to 18.

Based on Steven King’s bestselling 1974 horror novel, “Carrie,” the original 1988 musical was written by Lawrence D. Cohen with lyrics by Dean Pitchford and music by Michael Gore. It had a very short run that gained it a cult following, and became more popular after its 2012 Off-Broadway revival.

The musical is told within a frame narrative of Sue Snell (Megan Smith) being interrogated about the fateful events that took place during her senior prom in Chamberlain, Maine.

Sue pities Carrie and regrets bullying her, so she asks her boyfriend Tommy Ross (Brian Bowen) to take Carrie to the prom. Meanwhile, the worst of the bullies, Chris Hargensen (Danielle Taylor) and her boyfriend Billy Nolan (Brandon Richards) plot horrific revenge upon her.

The stresses of Carrie’s life are only compounded by the fact that her latent telekinetic powers are beginning to surface, following her first period and the bullying that arose because of it. The powers were depicted in a unique way, being portrayed by an ensemble (Allisa Baker, Wesley Brown, Karly Congero, Torreke Evans, and Olivia Michel) dressed all in black who moved props and set pieces when Carrie became agitated and started to lash out.

Additionally, these students were joined for the first time by both alumni and a member of the faculty. These cast members were alumni Brooke Hain and Wesley Brown and Elizabeth Van Den Berg, professor and head of the theater department.

The theater department is presenting one more event this semester, a Ten Minute Play Festival, featuring five short plays by student directors on Dec. 5 at 7:30 p.m. Performances will resume in the spring and will include The Student Directed One-Act Play Festival and “Bakkhai.”