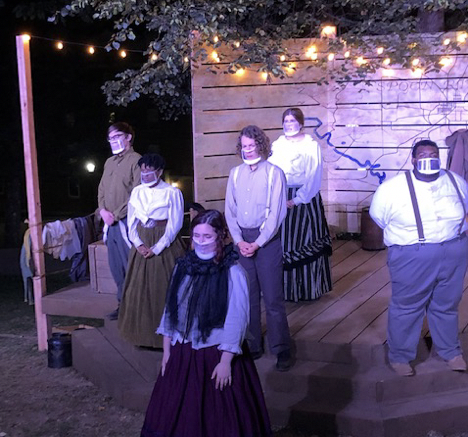 The performance was conducted on the pop-up stage (Syd Hinnant / McDaniel Free Press).

On Sept. 25th and 26th, McDaniel College Theatre performed “Spoon River Anthology” live on the hill near the gazebo. This performance of Spoon River Anthology features a musical adaptation by Charles Aidman and was based on Edgar Lee Masters’ collection of free-form poems.

The play was directed/choreographed by Julie Herber, musically directed by Alison E. Shafer, and stage managed by senior Flannery Bendel-Simso. Six McDaniel student actors and actresses portrayed “over 70 characters” who were epitaphs, former residents of the town of Spoon River.

The story follows a variety of former residents sharing their “lives, loves, and losses,” in a “humorous, poignant, malicious, and haunting” way, according to Herber. The story is set in the Spoon River Cemetery, which was referred to in the play as being on a hill. The set design was inspired by a “hipster country chic wedding,” said Herber, who was thankful towards set designer Shana Josyln.

The COVID-19 pandemic has impacted the setting of “Spoon River Anthology”, which was performed outside instead of in the McDaniel theater. Herber said that the play lends itself to “the natural landscape of the McDaniel campus.”

Adhering to the safety guidelines of McDaniel College caused production difficulties.  The rehearsal period was shorter than previous plays. Actors and actresses had to spend late evenings on weekdays rehearsing and performing outside, staying six feet apart, and wearing masks. Herber said theatre is all about “connection and at times [is] almost intimate,” but due to COVID-19 challenges, Herber and the production crew had to be creative in building the same theatrical experience as if the play was indoors.

Regular masks limited the visual expressiveness of the actors and actresses and muffled their voices. The production crew solved the problem by having the performers wear clear plastic masks, which allowed audiences to see their expressions, and microphones, which let audiences hear their voices. In the performance, there were a couple of dance numbers, and the way the dances were choreographed allowed performers to social distance while dancing together. For the audience, people brought their own blankets to sit on, the ground was marked for seating six feet apart with limited capacity.

Despite the challenges, the “Spoon River Anthology” was a successful live performance. I am looking forward to what’s in store for McDaniel College Theatre’s Spring Play.

From the archives: Top 10 headlines from the past 10 years