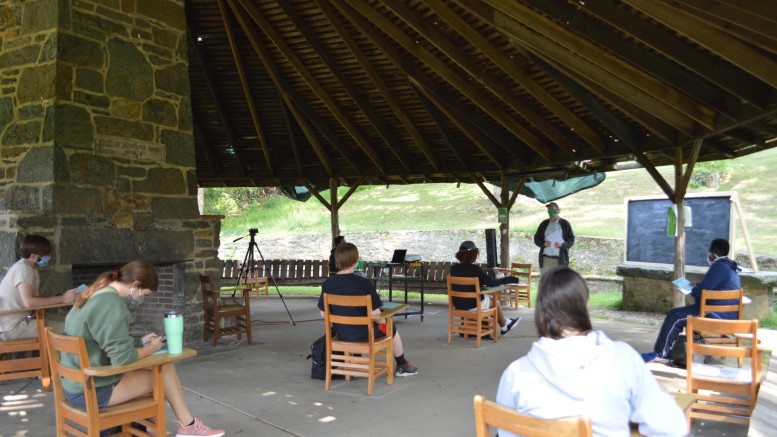 In a display of liberal arts inspired problem-solving, Professor Slade has taken a unique approach to mitigate some of the risks of COVID-19 during this unique semester; he is immersing himself and his students in nature and a COVID-19-free atmosphere by repurposing Harvey Stone Pavillion into an outdoor classroom.
Back in May, when the pandemic was worsening every day, Slade was thinking about how he would teach in the upcoming semester. Having some health issues himself and a family susceptibility to respiratory illness, he was personally invested in finding a safe place to teach for him and his students. “I want to be safe, I want my students to be safe,” said Slade. He sought to create an environment conducive to education, “I don’t want [students] to be worried about getting sick while they’re trying to learn something.”

In Harvey Stone Pavilion, ventilation is not a question. The fresh air blows through every second and the UV rays hitting students on their ten-minute walk to the secluded classroom setup acts as a natural disinfectant. “Outdoors is really the safest place to be,” said Slade.

Slade was approached by fellow faculty members who had concerns about the weather and the influences of nature on the space. “I took a lot of incoming sarcasm when they first heard of it,” said Slade. The space can be windy sometimes and an occasional squirrel is known to run through class and scurry onto the roof.

“I think too many of us have become disconnected with the natural world,” said Slade. Being in the space and so immersed in nature, “You start paying attention to the weather more. You start paying attention to the seasons more” said Slade. Despite having a front seat to the elements, in session A, there were only three classes where the rain resulted in a transition to online learning.

Slade was also inspired by an article in the NY Times touching on the time between 1920 and 1950 when many classes were held outside in tents. In the winter, students would use heated soapstones at their feet and blankets to keep warm. Slade joked, “If they did that in the early 1900s through the winter, my students can put a jacket on.” His class will be moved online as the winter weather rolls in.

In session A, Slade saw a notable improvement in grades, despite the universally felt challenges of being in a pandemic. “I can genuinely say that taking notes on a lecture has been way better outside,” said Daniel Ocampo, a student currently in the session B section of Slade’s TV production course.

“You can do everything you can do in a classroom,” said Slade, “There’s literally nothing I can’t do out here that I can do in a regular classroom.” In session A, Slade taught a course in introduction to media and TV production. He is able to project audio, display video, and use a chalkboard.

“It’s been a uniformly pleasant and challenging experience,” said Slade. His biggest challenge has been the amount of time it takes to set up. He gets there about 45 minutes before class starts to run cables and set up the computer, projector, and chalkboard. “Set up time is considerable but it’s worth it when you have a safe teaching space.” Luckily, being that a gravel road leads right up to the pavilion, he drives right up to his classroom in his electric car. “It’s so great to drive right up to your classroom, open the door, take everything out, and set it up right there.”

Harvey Stone Pavilion was built by the Civilian Conservation Corp built in 1934 as a part of President Franklin D. Roosevelt’s New Deal. Harvey Stone was built in response to the need for relief, reform, and recovery from the Great Depression. Today, it seems to function similarly, serving as a creative way to address the new dynamics of teaching amidst a global pandemic.

“McDaniel and its faculty and students are uniquely positioned to be creative and to thrive during this global health pandemic,” said Slade. Slade attests his own innovation and the creative problem solving of others on campus to the heart of liberal arts. “The liberal arts is all about adaptability and resilience and innovation.” He is hopeful, for not only his unique and successful project at Harvey Stone but for the growth he has seen around him as well. “I look around and I see the creative problem solving that’s happening among the faculty and the students and it’s encouraging how quickly we have been able to adapt,” said Slade.

20 years prior to Slade and his wife renovating the outdoor space, they held their wedding reception there. Harvey Stone was adorned with Christmas lights and other amenities, “It was amazing” said Slade. “We had figured out how to repurpose it as a wedding venue and so I know this space was infinitely repurposable. So if we could repurpose for a wedding reception it wouldn’t be that hard to repurpose it for a classroom,” said Slade.

The night before the semester started, Slade and his wife went to Lowes and purchased about $80 worth of plywood, brought the tools out to Harvey Stone, and built a blackboard on site. The very next day, Slade was there using it to teach in his adapted classroom, canopied by the changing leaves of the trees. And on Sept. 30, the twentieth anniversary of their wedding day, he taught a class. “There’s these weird patterns in life.” said Slade, “There’s things that reoccur in your life, that come back to you. It’s surprising. Like, ‘hey I’ve been here but in a different way.’”

Though its essence is ageless, Harvey Stone is still subject to the passage of time, and it needs some renovations. “I really hope there’s a way we could raise a fund to fix the roof and put in electricity,” said Slade, who sees a lot of potential in the space, not just for teaching in the pandemic, but for all time. “There’s a lot of holes in the roof. I think we should really do what we can to save Harvey Stone.”

“Like us, it’s resilient, the roof is coming apart, but it’s still hanging in there.”