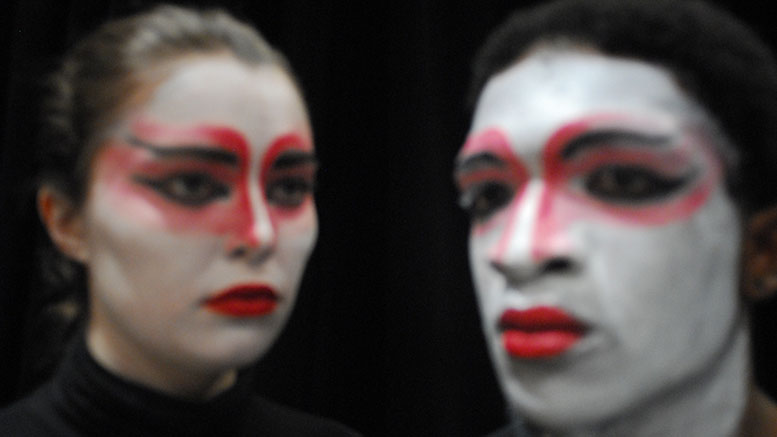 The Bakkhai promotional poster. Courtesy of the theater department.

This Wednesday, the theater department revealed the opening night production of “The Bakkhai,” a Greek play written by Euripides and translated by Anne Carson. The show was the capstone project and final theater production at McDaniel for many seniors in both the cast and crew.

However, in the final scene, a set malfunction caused the two main actors, Megan Smith and Torreke Evans, to sustain minor injuries. Audience members were asked to empty the theater and the two seniors were taken to the hospital as a precautionary measure.

Despite the misstep, the show continued for the rest of the week. Smith and Evans were discharged that same night and insisted on proceeding as planned. Thursday’s performance was tense as cast and crew members’ anxiety built up, leading to the final scene. Fortunately, the set behaved according to plan and the production ran smoothly.

Directed by Elizabeth van den Berg, “The Bakkhai” served as a welcome challenge to the theater department, which tends to put on more modern pieces. Van den Berg incorporated some modern interpretations in her version of the play, where Dionysos decides to teach Pentheus a lesson for imprisoning the Bakkhai, his followers, and refusing to believe in both the demigod and his right to rule Thebes.

Audience members have expressed how much they enjoyed the show and the new appreciation they have gained for Greek theater.

The hard work of the entire cast and crew, as well as the dedication of the senior theater majors has culminated in this epic production honoring theater and bidding farewell to the seniors as they look to graduate in the coming weeks.

According to Evans, he is “beyond thrilled to be going out as the God of Theatre.” Smith echoes his enthusiasm, saying she is “excited to finish her college acting career as the god of theatre, and wants to thank [her] friends and family for their love and support.”

New to the Free Press! Arts AND Culture!