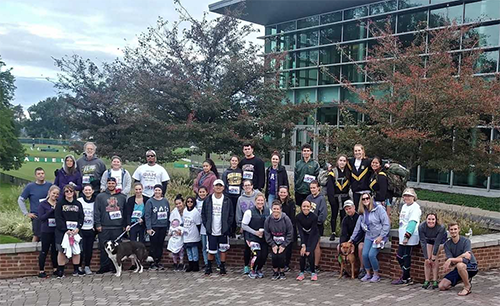 The sisters of Phi Alpha Mu and race participants pose after the Oct. 20 event. (Photo courtesy of Katie Ogorzalek).

Early last Saturday morning, runners and sorority girls alike gathered in front of Gill Center to participate in cardio warm-ups and prepare for an extended tour around McDaniel’s campus.

On Oct. 20, McDaniel’s local sorority, Phi Alpha Mu, held their third annual “Race for Her” 5K. The course started in front of Gill and looped around the entirety of the campus. Many said they got to see parts of the school they have never seen before.

“The race went pretty well. The route was creative, and I liked it a lot,” said Madisyn Goaneh, a sophomore. “I wish it was longer, though, for my own ambition because it felt great to walk all of that.”

The race was completed by 40 runners and the sorority raised around $2,500. “Most people signed up as silent runners, meaning they could not make the event, so they registered as if they were running it,” said Janette Carpio, Phi Alpha Mu’s 5K co-chair.

“Every dollar that was raised is going to two amazing causes,” said Carpio. “Half of proceeds are going to The House of Ruth, which is a domestic violence center for women and children. The other half is going towards the Phi Alpha Mu Endowed Scholarship, which goes to a woman in need at McDaniel.”

The House of Ruth is Phi Alpha Mu’s philanthropic cause of choice and is one of the nation’s top domestic violence centers, located in Baltimore. The organization has an 84-bed shelter and transitional housing, featuring a holistic health and wellness program, as well as an on-site health clinic staffed by the Johns Hopkins University School of Nursing.

“Knowing half the proceeds for the race go to the House of Ruth, and 50 percent toward a scholarship to provide a woman in need a better education, was an important factor in our decision to sponsor the race,” said Denise Lewis, owner of the local company Brook-Owen Realty. “To be able to help a fellow sister get out of a bad situation and rise up in the community is a blessing to us and just one small way we are able to give back to the community.”

Planning the race had its challenges, however. Earlier in the year, the sorority was not able to get a response from the City Clerk’s office in regard to necessary permits, which prompted them to change the route to on-campus. The original date had also been the day of Homecoming, causing the sorority to reschedule.

All things considered, the race appeared to have a positive impact on the McDaniel and Westminster community.

“I am very happy with the turnout,” said Carpio. “I was blown away with the amount of donations we received by people that wanted to support the causes.”