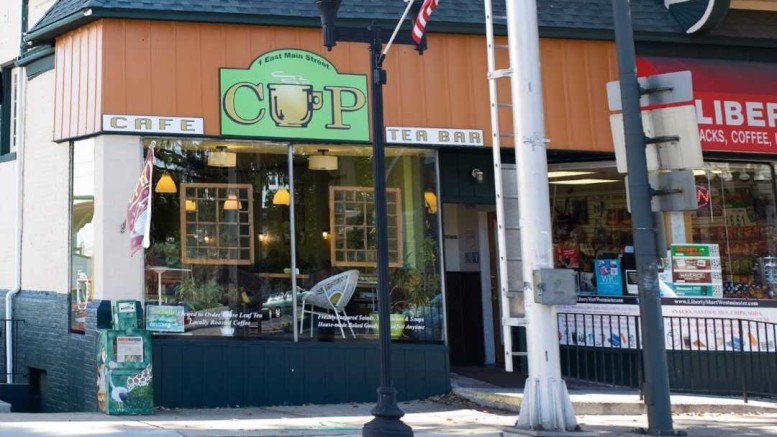 The popular 1 E. Main St. haunt was originally scheduled to close for a month for much-needed renovations. After the initial deadline was pushed back, Small Business Saturday seemed like a perfect grand re-opening.

Now, McDaniel students might have a shot to beat customers back to the Westminster area when they move in for the spring semester.

“We would love to have a grand opening at the start of the spring semester,” owner Traci Malinoski said, “and we’re hoping for a soft opening weeks before that.”

Though the cafe stopped accepting McDaniel Bucks last year due to costs associated with the program, Malinoski and her husband and partner Tash Otto still hold McDaniel central to their mission.

Students can still come in with their McDaniel mugs typically given out during New Student Orientation to get a free cup of tea, and Malinoski and Otto are looking into other student discounts and programs.

“One of the main things we want to do is get a better relationship with the students,” Malinoski said.

She expects to start holding regularly scheduled open mic nights with an emphasis on student work.

The Cup is also looking to employ more McDaniel students once they reopen, and has considered staying open later on Thursday nights.

“When you’re in a college town, it’s so important to be integrated,” Otto said.

They also plan to reopen with more allergy-friendly options.

“Not only do we have the gluten free and vegan options,” Malinoski said, “but also we’re so versatile with adding or subtracting things from your entree. We’ll do whatever when we can.”

“We want to be something unique as far as what we offer,” Malinoski said. “[We have] an extensive menu of soups and salads, as well as alternative options.”

Despite the setback in construction, Malinoski and Otto have remained optimistic over the last few months.

“We are part of this community, this is what we do,” said Otto. “We’re anxious to get back to work.”

Working on Westminster’s Main Street wasn’t always the plan for Malinoski and Otto, however.

Though Malinoski always knew she wanted to own a cafe, she didn’t think the Cup would be that cafe when she started working as a server in 2015.

“I figured it was maybe something that would happen when my kids were out of the house,” she said.

Malinoski worked her way up at Cup, quickly becoming the cafe’s top server.

Then, two years later, Malinoski’s daughter Bethany joined her mom on staff for her first job. The Sykesville family had found a new home in the Westminster corner store.

So when Andrews told her staff in May 2017 that she wouldn’t be able to continue running the business, Malinoski was shocked.

“I think a lot of people were,” she said.

The night before, Bethany told her mom she should open up her own place.

Naturally, Bethany pushed it some more on their way home from work the day Andrews broke the news.

Otto was all in, too.

“His immediate response was ‘Why don’t we take over?’,” she said.

The next few weeks were a whirlwind for the family, as Otto puts it.

“It was kind of an unexpected opportunity when it happened,” Malinoski said. “It seemed like the right thing to do in so many ways.”

And for the most part, she’s been right.

Malinoski knew all the operations from her serving days, and Otto had experience running a number of previous storefronts.

She also loves to bake, a skill that helped in the transition of ownership.

“I always have,” Malinoski said, “so that was another thing that helped when I made the decision [to take over.]”

With nearly a year and a half of ownership experience under their belts and two months of closed doors, Malinoski and Otto can’t wait to reopen.

The tea bar, where customers can sit and talk with staff, will be back, along with a revitalized dining area.

“Much more spacious than before,” said Otto.

“Newer, fresher, but still with all the warmth that we’ve always had,” Malinoski can assure customers upon their reopening.