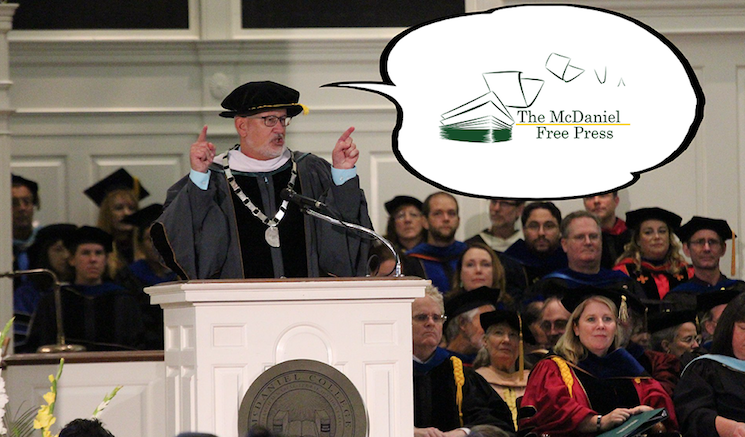 Since October 2018, the Free Press has published several articles surrounding the recent academic restructuring announcement and the process that led to the changes.

President Casey, on multiple occasions, has referenced these articles in communications to the McDaniel community regarding the restructuring.

It is unclear whether this is a coy attempt to get our attention.

The first reference was in an email to all students sent by Casey on Jan. 7. The president was “writing [the student body] with an update,” in which he linked an October Free Press article as a summary of the academic update process in order to keep the email’s word count down.

The president also announced on Feb. 28 the creation of a web page dedicated to the academic changes where, at the bottom of the page, readers are directed to “additional resources” – two relevant Free Press articles.

Scholar of presidential communication in higher education after liberal arts slashes Serena Faux said this amount of attention on an otherwise overlooked student publication is normal.

“College presidents often cite the university newspaper in situations like this,” she said. “They’re basically saying, ‘Hey, look – these kids have managed to deliver this information in a digestible format. Please read it and maybe you’ll be less angry.’”

Faux said the references to student-published news die down after about two weeks.

However, Casey has continued to mention the Free Press and its articles well past Faux’s two-week mark.

In a recent Q&A session with parents of prospective students in McDaniel Lounge, one father asked about the available Jan term courses McDaniel offers.

“I believe the Free Press has several articles about Jan term courses,” said Casey. “Why don’t you visit their website? Next question.”

Casey also referred several parents to the Free Press about subjects that ranged from the College’s athletics to Westminster restaurants. Eventually, a PowerPoint slide was projected with the Free Press website in bold text that remained on while Casey spoke.

An anonymous source also overheard the president speaking on the car phone in one of his Rolls-Royces.

“Ah, yes, why don’t you read the Free Press to find out a bit more about that,” he reportedly said.

The Free Press is waiting for President Casey to reach out to us for comment.

The View from Here: A New Landscape