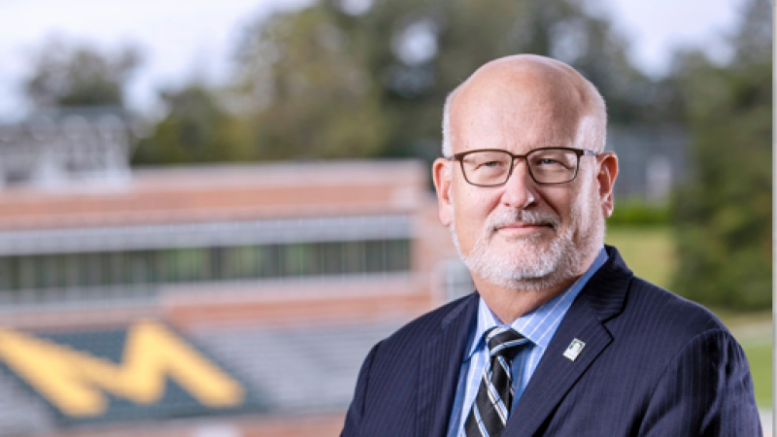 President Roger Casey reflects fondly on his story and role of a storyteller as the ninth president of McDaniel College. “[Every year] I listen to hundreds of people tell their stories and their experience at the college. It’s my job to either retell those stories or recraft those stories in a way so that we have a coherent narrative of what is McDaniel/McDaniel’s aspirations,” said Casey.

He found the presidency came with representing and connecting the interests of the McDaniel community, relating it to the work of a telephone switchboard operator. “Every single day in the president’s office you have some experience touching every one of the college’s constituencies,” said Casey. He was tasked with communicating between and amongst everyone from alumni and trustees on the governing side to faculty and student body, to external lobbying.

“You’re extraordinarily dependent on the interface of lots of different people, lots of different constituencies. One of your biggest jobs is to figure out how to help get those people connected. You are constantly in the connection business,” said Casey.

Over the past nine years, Casey has reported directly to the Board of Trustees and spent his time executing his vision for the college, leadership, planning, and operation of the college’s programs and services.

He boasts several large accomplishments, including the creation of programs such as the Dorsey Scholars Program, cosmetic improvements around campus, and the recruitment of the largest and most racially diverse incoming class, under his leadership.

There have also been large strides revolving around diversity, equity and inclusion. “We’ve done a significant amount in terms of diversifying the student body, but I think particularly over the past 15 months or so our focus on inclusion has been equally as important to our focus on diversity,” said Casey.

During his presidency, Casey also focused a lot on access and affordability for students, motivated by his background as a first-generation college student himself.

Along with this pursuit, he sought to put McDaniel College on the map, “One of the things I wanted to do was make sure we were one of the colleges in the Princeton Review, which is arguably the most prestigious listing,” said Casey. “I wanted to be number one in something… we got the #1 US news best value ranking for the last two years.”

Casey believes he is leaving the college in the capable hands of Julia Jasken, PhD, who has been selected as the college’s tenth president.

“I am delighted that the trustees picked Julia Jasken to be my successor. I’ve worked with her for years, almost every day since I’ve been here,” said Casey.

Having spent so much time together, Casey feels comforted knowing that his legacy will not be dismissed by an outside hire. “Julia and I worked on a really strong trajectory together, so I feel great knowing that she’s supportive of that trajectory. She’s going to do a fantastic job.”

Casey even has some advice for his successor, as well as other incoming members of McDaniel’s administration: “Don’t take yourself too seriously. Have fun, and stay true to yourself. It’s really easy to get knocked off your center in these jobs and start doubting things but you just have to stay true to yourself,” he said.

Casey reflects on his 11 years of his presidency knowing that leadership can be tricky, and sometimes difficult decisions have to be made. “My favorite definition of leadership is: leadership is the art of disappointing people at a rate in which they can bear,” he said.

Casey faced that struggle most fervently in the department cuts a few years ago. “Nothing in my 11 years created more controversy than the project we went through to evaluate the curriculum. That project resulted in the closure of some majors and the loss of some jobs,” said Casey.

Casey acknowledged the public outcry, and the reality of how department cuts damaged connections of McDaniel community to the programs they loved, but he reiterated the positive outcomes that motivated the decision. “We took those dollars, reinvested them in other areas. Certainly from an economic and student-satisfaction perspective it was a positive outcome, but of course it alienated some current students, alumni, and faculty.” said Casey. In reflection, he said, “In a role like this, unfortunately you’re always disappointing somebody. You have to deal with the aftermath of that… I think I would do it all over again exactly that way.”

When asked what he would have done differently during his time as president, Casey said that sometimes he wishes he responded quicker to large events in the news. “There’s been a couple times where something happened on a national scale and my tendency is to hold back for a few days and evaluate the situation. I think in retrospect on a couple of those occasions I should’ve jumped in faster.”

If he had more time in the President’s office, Casey would be focused on creating a more diverse faculty at McDaniel.“That’s the one I’d be obsessively focused on because we owe it to our student body to have a staff and faculty that is representative.”

Casey, while welcoming of change and cognisant of changing plans, is heading off for a sabbatical of travel with his wife, Robin Allers, between New York and Florida, before heading to Budapest. After spending a year at McDaniel’s sister campus, he will be back in Westminster to instruct courses at the college in some capacity.

First and foremost, Casey said, “The fundamental thing is making sure [my dad] is okay.” Casey suffered the loss of his mom in Nov. of 2020, unrelated to the COVID-19 pandemic, but of course still connected to the impact of grief tragedy has on a family and a person during the heightened time of national crises.

In closing, Casey said, “It’s been a marvelous 11 years. We have the greatest student body. Students keep me going…they’re the beneficiary of what we do, and the reason we’re here is students.”