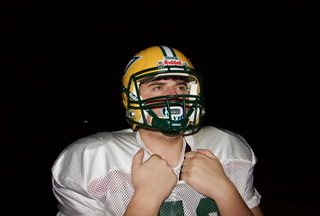 For an athlete, injuries are simply a part of life.  Depending on their severity, they can dramatically change an athlete’s life. While many injuries players experience are easy to see and treat, some are much more complicated, such as concussions. Concussions are a physical injury to the brain, thus adding many complications to the healing process and can leave players with many unknowns for the future.

Concussions seem simple on paper. We bang our heads too hard, we are dizzy for a couple weeks, but we will fully recover. Although, for many football players, concussions are more consistent in comparison to other sports. According to Head Athletic Trainer Gregg Nibbelink here at McDaniel, “we would likely see more linemen getting concussions” in football, and this is usually due to the consistent “head-to-head” contact they experience while playing.

Concussions are a serious mental and physical issue for players, but what makes them so difficult to treat? Nibbelink explains that concussions differ from other physical injuries because of “the unseen effect that they have” on athletes.  He explains, “with many injuries [such as a torn ACL or broken bone], you know when the healing time frame will be, but with concussions, that time frame is an unknown.” Furthermore, while major head trauma is an issue for football players, smaller and more frequent concussions play a big role in the long-term symptoms players face throughout their life. Nibbelink states that “minor micro traumas ultimately create that cumulative effect.”

Daniel Aboagye (freshman offensive tackle) and Jayden Rodwell (freshman defensive tackle), both play for McDaniel football and have both had extensive concussion histories while playing the sport. Rodwell, who has played football since the age of four, has had 12 concussions.

“Before playing in college, particularly in high school, we wouldn’t want to get pulled out of the game for a bad blow to the head, so I just wouldn’t say anything.” He also noted “Sometimes I knew I had concussions, but I just brushed it off and played through the head pain. A lot of times I didn’t even know I had one.”

Staying silent or being unaware of concussions has caused seven out of Rodwell’s twelve concussions to go undocumented. Daniel Aboagye, who is currently concussed, explains a similar situation. “I definitely have had more than my three documented severe concussions,” he said. “There were times I downplayed my head pain, but looking back, they were probably minor concussions.”

Along with the initial injury, the long and short-term effects of concussions are astonishing. Both players shared that the first thing they worry about when being concussed is, “what long term effects will this one leave me with?”

Some of these long-term effects both players mentioned were balance issues, decreased attention spans, short term memory loss, and mood swings to name just a few. Rodwell said, “My sophomore year I could simply not process information. At one point during my recovery, I was speaking like a toddler. There was one time I couldn’t recognize myself in the mirror or pictures. It was pretty scary.”

According to Aboagye, “when you can’t read a proper sentence for weeks in class, it makes school so much more frustrating.” Both players experienced major difficulty in school after being concussed. Similarly to Rodwell, Aboagye worries that “I basically just won’t be able to function if I get another one.”

Nibbelink and both players shared that honesty is the biggest form of prevention for athletes.

“Speaking up about head pain to your trainers is something you have to do,” Rodwell stated. “My biggest mistake was putting football before my long-term health.”