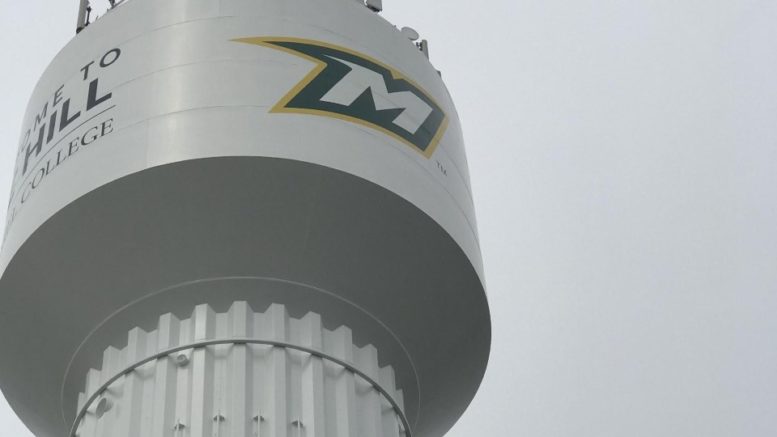 Eighth wonder of the world. (Photo courtesy of that guy we found outside)

Students at McDaniel College were delighted to return from winter break to a greatly-anticipated change: at long last, there is now a Big Honkin’ M on the water tower. The Big Honkin’ M was placed on the water tower due to unprecedented popular demand. A poll sent out during the Fall semester asked what kind of improvements students would like to see for the school. An overwhelming 99% of respondents answered “Big Honkin’ M on the Water Tower”.  0.5% of students voted “actual improvements to the school” while the other 0.5% voted “other”.

Though the purpose of the Big Honkin’ M was at first unclear, it has proved to be a fantastic asset. Andrea Cungadero, a student living in North Village, has found the Big Honkin’ M to be a welcome change in her campus life. “Sometimes I get so hungover that I actually forget where I am,” she said. “All I have to do is stumble outside and look upon the majesty of the Big Honkin’ M and I remember immediately.” A lacrosse player that chose to remain anonymous feels a similar fondness for the Big Honkin’ M. “When I’m walking home from practice, bleary eyed, tired, and sweating jungle juice, the Big Honkin’ M is what keeps me going,” they said.

Seeing the positive response, President Jasken is considering making the Big Honkin’ M even bigger than it currently is. All we can do now is hope that she does the right thing and makes the Big Honkin’ M as big (and honkin’) as it possibly can be.

Student Chooses to Become Hobo Rather Than Pay for Housing