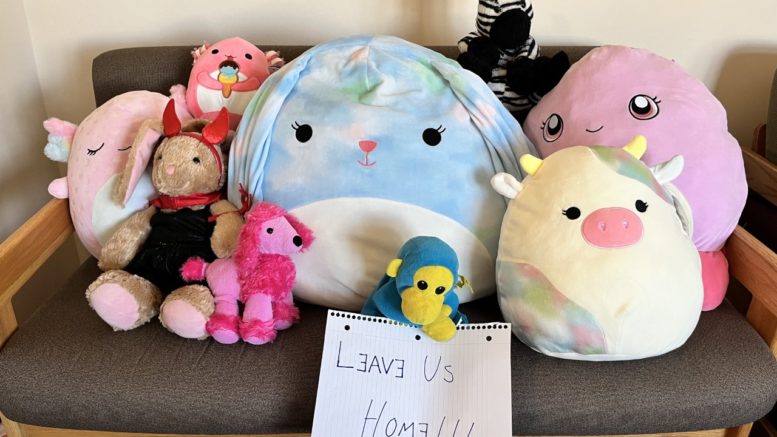 A shocking new study released on Tuesday by students in McDaniel College’s Psychology Department found that nearly 73 percent of McDaniel’s stuffed animals would prefer to be “left at home” for the upcoming academic year.

“What we found is quite unexpected, and it contradicts what we usually believe makes our stuffies happy. They don’t necessarily want to be around us all the time, especially at college,” said Julie Hanover, a student-researcher.

The study reports that, on average, six out of ten McDaniel stuffed animals find their person to be “absolutely insufferable” and “profoundly stupid” from the ages of 18 to 22.

“Going out on a Tuesday night for a $6 pitcher when they have an 8 a.m. the next day is just asking for trouble. Then, they want me to make them feel better the next morning!” exclaimed Lovey the sheep to reporters upon the study’s release.

Many in the study reported the dormitory beds as a part of their reasoning for staying home. “The bed is too hard, the sheets are somehow always uncomfortably damp, and the pillows smell as if Smirnoff himself spent a weekend sleeping off his three-day bender,” claimed Blue the horse, an ANW resident. “I’ve had to lie on that godforsaken blue, plastic mattress. I can still feel the years of built-up bacteria and regret between my ears,” said Bun-Bun the rabbit, a Whiteford resident.

Others report that having to constantly hear and see things that they do not want to as the primary reason for their desire to remain home.

“I’d like them to remember that we can’t move by ourselves,” said Cow Cow the duck.

In fact, personal autonomy is a major concern for many of our plushies with limited mobility. “Occasionally I get lucky and fall off the bed before they get home on a Saturday night. Let’s be honest here: the bed is only big enough for one of us to be stuffed,” remarked Pancakes the monkey of North Village.

However, a small minority of stuffed animals say that they enjoy their time on campus. “Sometimes I like to watch,” said Razor Blade the snake.