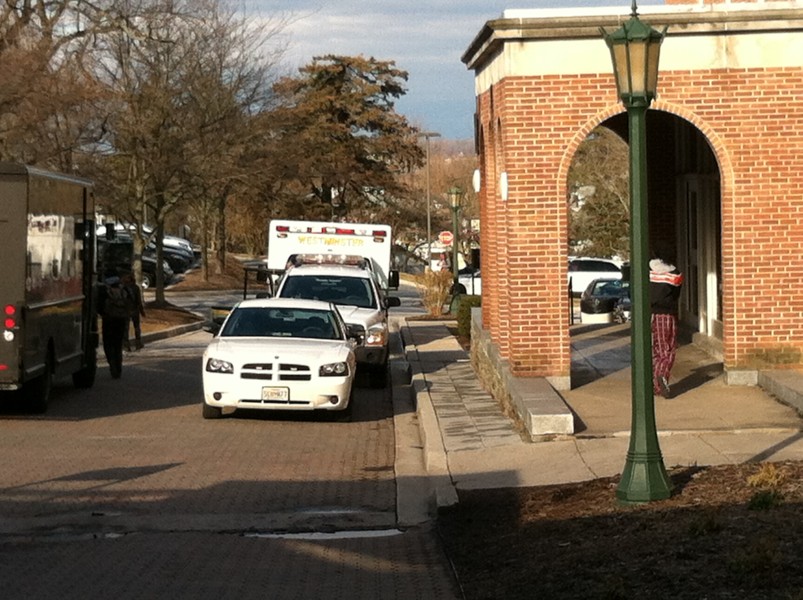 Starting around dinnertime and late into the night of Tuesday, Feb. 26, students found themselves battling for space in public bathrooms due to extreme flu-like symptoms. As students who had avoided what has been coined McVirus, McPlague, and Glaropocolypse wandered into empty classrooms the next morning, wild rumors began to circulate about the origin of the illness.

21 people had been diagnosed with gastroenteritis as of 12:30 PM on Wednesday, according to Simone Lindsay of the Carroll Hospital Center, although she could not identify how many of them were McDaniel students. At press time, there was no updated information available. Campus Safety, U.N.I. Urgent Care, and ExpressCare were unavailable for comment.

Many students initially believed that the cause was a widespread case of food poisoning. Erin Brown, a freshman residing in Whiteford, said that the sounds of vomiting could be heard up and down the halls throughout Tuesday night.

“I heard that if you ate the beef and potatoes, you would be sick,” she explained. “Sure enough, four of my friends were sick that night.”

At 10:45 AM, a message was sent to the McDaniel community announcing that the outbreak was a case of gastroenteritis, a virus.

Susan Glore, Director of the Wellness Center, emphasized, “It is absolutely not related to Glar. Technically one person could go home, get a virus, and sneeze [to cause this].”

However, students remained skeptical even after the email about gastroenteritis was sent. Jason Stein, who began to exhibit symptoms at 2:30PM on Tuesday, stated, “Even if the illness we are experiencing is caused by a virus, as the letter that went out to all students said, that virus is sometimes passed through food that has not been prepared properly. So, given the amount of cases and the timing of those cases, I would say that this virus was definitely food-borne and something for which Sodexo should be held responsible.”

Junior Vicci Alexander, however, has a contrasting account of the virus: “I was admitted to the ER at approximately 6 p.m. [Tuesday], and since I hadn’t eaten anything in over 14 hours they completely ruled out food poisoning.” Alexander claimed that she had not eaten in Glar since Monday at lunch, ruling out the possibility of bad food that students have been concerned about.

“We live in such a close environment; it’s easy for a virus to spread,” explained Glore.

Among many theories, one anonymous student believes that it could have been spread through the swiping of ID cards outside of Glar. Common areas, such as bathrooms, classrooms, and dorms are also high risk areas for contracting the virus.

Gastroenteritis is highly contagious; according to The Mayo Clinic, the most common cause of the virus “is through contact with an infected person or ingestion of contaminated food or water.” They say that the virus is easily passed “through the fecal-oral route.”

An article on NJ.com poses the possibility that gastroenteritis could be a norovirus: “Unlike influenza or other viruses that take ingesting hundreds of thousands of particles of the virus to get sick, it takes less that 20 norovirus particles to get hit with the illness.” Athough thorough hand washing will only help, it is still likely that if you come in contact with someone who is infected it will be passed on to you, the article explained.

Regardless of origin and severity of the outbreak, currently unaffected students can take preventative measures to remain well. A key strategy is to avoid sharing with affected students. Glore elaborates, “You know that book All I Really Need to Know I Learned in Kindergarten? It probably tells you something about sharing. We’re telling you now: don’t share!”

Stay tuned for updates on the story as we get more information.

According to an article by WBALTV, “campus officials said 40 students became ill with gastroenteritis over…two days, and a few of them went to the emergency room on their own.” According to an unscientific poll conducted by the McDaniel Free Press, 61 people had responded that the virus affected them as of press time.

The college is very concerned and is continuing to offer support services.

Area Coordinator Michael Robbins posted on Facebook that “housekeeping will be checking and re-checking bathrooms…the dining facilities are cleaning tables constantly…and we also created a run of posters…on self-care.”

Rumors of food poisoning or Glar-related causes are still spreading around campus. Freshman Kirsten Coleman said “I saw a can that said kitchen cleaner on it and it had a hose going down under Rouzer, it started around 1 [a.m.] and probably stopped by 2:30 [a.m.].” Coleman observed this last night but said she did not know much about it. There is no confirmation that it was not a routine cleaning or an emergency sanitation.

Junior Lexi Jacobs is the only student at press time that the McDaniel Free Press was aware of being diagnosed with food poisoning.

“[Gastroenteritis] usually lasts at least 18 hours, but what I had was only a few hours. I passed out in the morning due to fatigue and weakness, but after staying in the hospital for about an hour my symptoms started to dissipate and I was able to get back on my feet.” At press time, there were no connections between Jacob’s case of food poisoning and food in Glar.

The administration continues to comfort the student body and claim that food poisoning is not to blame. Lieut. Joshua Bronson, emergency medical responder for McDaniel College Campus Safety posted on Facebook that he wants to “try to dispel any rumors about food poisoning which the hospital has told us it is not and that it is in fact a virus.”

The McDaniel Free Press is not claiming to know the cause of this virus that is affecting campus nor is it suggesting that it could be food poisoning or caused by Glar. All opinions stated in this article are the opinions of the sources quoted, and not necessarily of the McDaniel Free Press.

The college is taking steps to prevent the further spread of the virus, as well as reach out to students who have been infected.

“Members of the Student Affairs staff are checking-in on students on-campus by going around to residence halls to make one-on-one contact with students. Our housekeeping staff is continuously cleaning railings, doorknobs, doors, etc., and cleaning residence hall bathrooms, as well stocking up on soap and disposable hand towels,” said Knauer. “In the foodservice area, staff are cleaning tables constantly and self-serve food utensils are being swapped out regularly for cleaning. Students are also being provided with boxed meals to those who are ill, so they can remain in their rooms. We also have posters and fliers on self-care put up around campus and the residence halls. We are still encouraging the campus community to be vigilant about hand washing and other wellness tips.”

Dean of Faculty Debbi Johnson-Ross has said that classes will be convening tomorrow as scheduled. The college is not aware of any classes that have been cancelled due to student illnesses.

A Statement from Dean Gerl

Glar to Have Wintertime Renovations

16 Comments on "Students panic over rumors of food poisoning, administration points to virus"