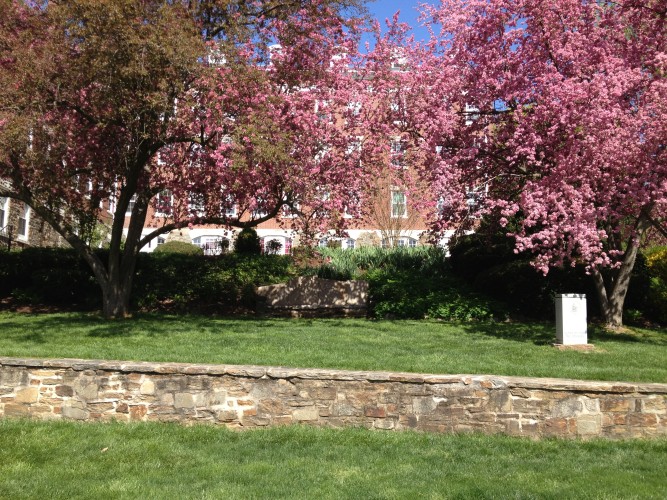 You may have noticed the garden behind McDaniel Hall, which provides the already beautiful McDaniel campus with a little more beauty. Robinson Garden was named after Miss Margaret Robinson who was the Dean of Women from 1908-1928.

In 1926, McDaniel’s own Phi Alpha Mu was officially recognized and in 1927, Miss Robinson planted the sorority’s flower, the pansy, in the garden.

Today, Robinson Garden is still lively with a lot of plants, but McDaniel’s own Professor Priscilla Ord, an English professor, has decided that she would like to spruce up the garden.

Professor Ord, the current faculty advisor for Phi Alpha Mu, is not only fixing the garden for the sorority but for her mother as well.

In her interview, Professor Ord talked about how her mother, Sarah L. Ord, always wanted a garden of her own. Professor Ord was part of a military family, which made having a garden very difficult.

In March of 2012, Professor Ord’s mother passed away never having a garden she could call her own, so with the money Professor Ord received from her mother’s estate, she intends to renovate the garden, replacing some of the shrubbery and to add more color to the growing garden.

The rest of the gardening is subsequently being handled by Douglas Lawn and Landscape, a local landscaping company here in Westminster.

For those who may want to view the renovations of the garden, Douglas Lawn and Landscape will commence with the renovations after Reunion Weekend but before graduation weekend.

From the archives: January on the Hill