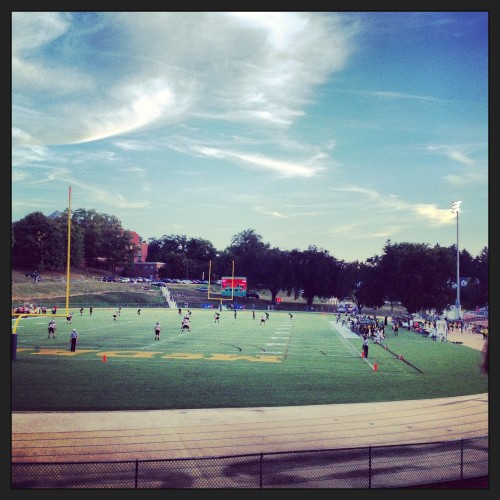 On Saturday, Sept. 7, McDaniel hosted Catholic University for the first night football game in the stadium since 1937. The atmosphere, needless to say, was intense. The hill was full of students, the bleachers were full of fans, and cars, tents, and grills of tailgaters lined half of the stadium. Sophomore Elisa Santoni said it was fun to hang around the different sororities and fraternities before the game. You could smell the hamburgers and hot dogs from the parking lots to the gym. Energy seemed to flow throughout the stadium, reaching players and fans of all ages. It was the perfect beginning to the game.

After the first kickoff, the energy seemed to gradually die out on the field for the home team, but would later pick up again.

On each of their respective first drives, both McDaniel and Catholic were forced to punt.  Catholic’s second drive of 90 yards resulted in a 13-yard touchdown run from T.J. Tutone. This made the score 6-0 after a bad snap on the extra point.

The Green Terror were unable to capitalize on their next drive, so the Cardinals took over again.  The result was another 13-yard touchdown run, this time from E.J. Montgomery. At the end of the first quarter, the score was 13-0 in favor of Catholic.

The second quarter proved to be an even greater challenge for the home team. On a 4th-and-1, Catholic’s Nick Cortese ran for a touchdown, putting the Cardinals up 20-0 with less than four minutes left in the quarter. McDaniel failed to score, which allowed Catholic to increase their lead even more after a 39-yard touchdown pass from Montgomery to John Serdakowski.

On the following possession, McDaniel drove down the field to inside the Catholic 10-yard line and scored on a 27-yard field goal from Bill Castor. Avoiding the shut-out, Catholic’s lead was cut to 24 points.

They soon responded, however.  Tutone connected with Andrew Oullette on a 7-yard touchdown pass to increase the Cardinal lead again.  At halftime, the score was 34-3.

During the second half, the Terror defense did not allow as many points as they did in the first, and they were able to add on some points of their own.

Late in the third quarter, Catholic’s Montgomery threw another touchdown pass, this time a 3-yarder to Tucker Hubbell, which increased the lead to 41-3.  On their ensuing possession, the Cardinals were able to score again, making the score 48-3 going into the fourth quarter.  This would be the last touchdown for the visiting team, as the McDaniel offense began to show a little life in the last quarter.

On the first play of the fourth quarter, McDaniel’s Joe Rollins broke away on a 30-yard run for a touchdown, decreasing Catholic’s lead and making the score 48-10.  Later, the Terror converted on a 4th-and-8 fake punt play when Mike Oliveto completed an 18-yard pass to Mike Cousar. This made room for Rollins to reach the end zone on another run, increasing the score to 48-16.  That would be how the home opener ended for McDaniel. Despite a well-fought fourth quarter, it wasn’t enough to overcome the deficit accumulated in the first half.

The Terror defense had some impressive individual performances in the game.  Senior Derrick Miles led the team in tackles with 12, followed by senior Erik Klugh with 11 solo tackles, and senior Mike Cousar with 10.

On the Cardinals’ side, Michael Pitzenberger ran for 179 yards in 28 carries and Evan Calvo ran for 100 yards on 20 attempts.

It wasn’t exactly the ideal ending to the first game of the season, although there was a particularly entertaining incident in the fourth quarter. Witnesses say a student in a green morph suit hopped the fence and ran straight across the field towards the tennis courts, where he jumped the fence again and kept running. Will this become a regular occurrence at football games? Well to whoever that was, thank you for lightening the mood during the game!

After an impressive win over Stevenson in a scrimmage the week before, the expectations were set pretty high for the Green Terror.  When asked what the team did well in the game, Joe Rollins said, “We didn’t give up.  That was the biggest thing I liked from the game…we kept fighting.”  He also said in regards to the upcoming game, “We have to execute our assignments better and if we do that, we will be fine.”

The Terror will host Moravian in an inter-conference matchup on Saturday, Sept. 14 at 1 p.m. as they attempt to get their first win of the season.

Trump Drops Out of GOP Race