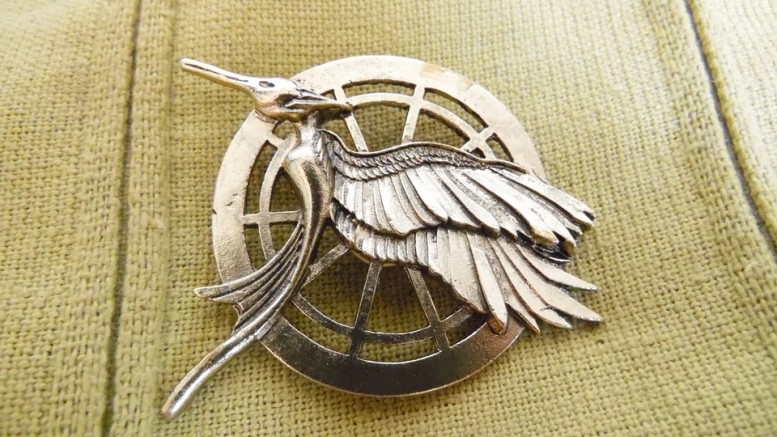 Now that I’ve managed to calm down enough to type, I have to say that “The Hunger Games: Catching Fire” was absolutely amazing. I laughed, I very nearly cried, and I wanted to punch some characters. But most importantly, I wanted to rally for Katniss, Peeta, and their allies; I left the theater just as excited about the movie as I was when it first started. I will definitely be seeing it again, whether that’s in a theater or playing it repeatedly when the DVD comes out.

“The Hunger Games” Trilogy by Suzanne Collins was immediately one of my favorite series as soon as I finished the first book. The writing wasn’t the best I’ve seen, but the plot was so gripping, the world so

fascinating, and the characters so realistically diverse that I couldn’t put it down. But the moment I read “Catching Fire,” I was irreversibly and thoroughly hooked. It was, and is, by far my favorite one. As for “Mockingjay”…well, I don’t want to talk about that one, because I don’t have much, if anything, nice to say.

When I learned the books would be transformed into movies, I was both excited and concerned. As trailers came out, my excitement grew and the concern diminished, but there was still the question: what if this doesn’t live up to the book? Then it totally did.

And early Friday, when I truly sat and thought about the fact that I’d be seeing the second movie later, I wondered whether or not it would be as good as the first. The trailers indicated it would be, but there was still worry. What if it doesn’t focus on the right things? What if they do things differently or get things wrong and it ruins the effect by making me think about the changes? What if Finnick’s “Want a sugar cube?” line isn’t as good as I’d hoped? Many of my friends that also read and loved the books have or had the same concerns.

I’m here to tell you that there’s nothing to worry about. The movie nailed the book in emotion, characterization, and plot. There were the same sad, angry, sweet, and comedic points the book provided, only on screen by wonderful actors and actresses.

Obviously, some things were different. Scenes were combined where they could be and some were taken out. Conversations weren’t always line-for-line in order to make the movie flow and keep the scenes at a good length. Finnick’s net outfit wasn’t anything as I’d pictured.

However, they took many lines directly from the book, such as “Convince me” from President Snow and Katniss’s “I’m going to stay right here and cause all kinds of trouble.” Plus, although the details aren’t always the same, the feel and flow of the plot was. It was slower at the beginning and picked up pace as the story went on. The major points are there, be they deaths or kisses.

The writers, producers, and director did an amazing job with the script, editing, and the overall creation. Jennifer Lawrence (Katniss) brought her A-game, as always, with Josh Hutcherson (Peeta), Sam Claflin (Finnick), and Liam Hemsworth (Gale) with her every step. Woody Harrelson (Haymitch) and Elizabeth Banks (Effie) once again had a lovely frenemy-ship. Lastly, the “enemies,” Donald Sutherland (President Snow) and Philip Seymour Hoffman (Plutarch Heavensbee) did amazing in their roles, giving a face to the Capitol antagonist.

I can’t say much more without giving anything away and I really don’t want to do that. I know not everyone has had a chance to see it and hasn’t read the book. If that’s the case, brace yourself. It was an emotional hovercraft ride even knowing the plot. You never, ever know what’s going to happen with your favorite characters. Will they survive?

To those who want to see “Catching Fire” and have yet to do so, I wish you luck.

To those who have already seen “Catching Fire,” I hope you thought it was as good as I did.

Finally, to those who have no plan to see it….
May the odds be ever in your favor.

Stranded by a Snowstorm: One student’s take on being stuck in Boston

You’ve Got the Power: One Small Step for McDaniel