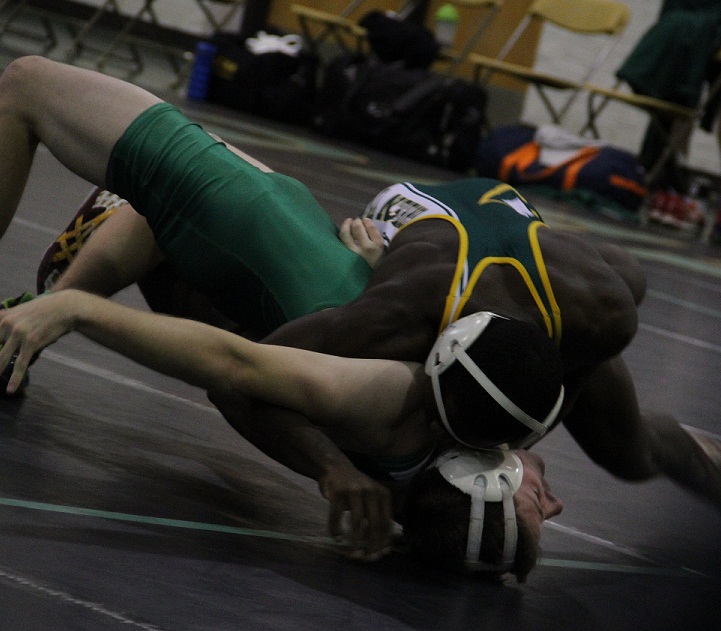 On the morning of Nov. 23, 2013, McDaniel Wrestling fans showed up in hordes to fill Old Gill Gymnasium to support the team. The Green Terror wrestling team moves to a 4-0 record for dual meets for the 2013-2014 wrestling season thus far. Green Terror wrestling took on Southern Virginia, West Virginia Tech, Scranton, and University of Maryland Baltimore Campus (UMBC) for their first home match of the season. The men had great performances and brought home noteworthy victories over every school. McDaniel triumphed over each meet, taking home a 42-6 victory over Southern Virginia, a 34-12 victory over Scranton, a 28-19 victory over West Virginia Tech, and a 35-11 victory over UMBC. 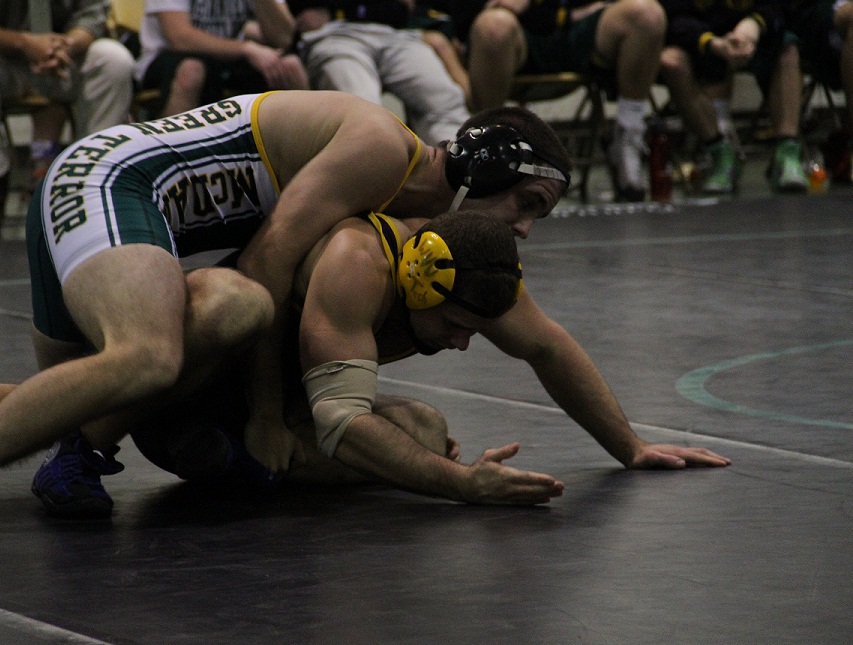 Ryan O’Boyle at 133 lbs, Alvontae Drummond at 141 lbs, Mason Goretsas at 149 lbs, and Logan Yox at 165 lbs were key scorers for the team. Ryan O’Boyle won the three matches he wrestled, two by pin and one with a major decision, with another win by forfeit. Mason Goretsas won both of his matches, one by pin the other by decision. Alvontae Drummond (141) won his two matches, one by pin and the other by technical fall, and won one by forfeit. Logan Yox won all four of his matches, three of which were due to pins.

The Green Terror already started off with giving up six points to the opposing team due to the lack of a 125 lbs wrestler. The matches against Southern Virginia started out with forfeits in Ryan O’Boyle’s (133) and Alvontae Drummond’s (141) matches, accompanied by the victories of Logan Yox (165) with a pin and Ricky Tsinger (174), who won his match 10-5. Nick Cross (184) won with a pin in less than a minute (57 secs) and Dakota Wilhelm (197) also won with a pin. Taylor Avino (285) won by forfeit.

The Green Terror anticipated that West Virginia Tech would be the hardest match of the day. The matches against West Virginia Tech were skillfully executed. Ryan O’Boyle (133) won with a pin in less than a minute, followed by Alvontae Drummond (141), who pinned his opponent barely two minutes into the first period. Mason Goretsas (149) brought home a 7-4 victory; Logan Yox (165) also won with a pin. Taylor Avino (285) ended the bout with a 12-0 major decision win.

Head Coach Davey Blake said that he “was super impressed with the team effort.”

“We were ultra-aggressive,” Blake continued, “pushed the pace of our matches, and were relentless in the top position which translated into a lot of pins. The goal is to improve and carry this momentum forward!”

The next McDaniel wrestling match will be at Messiah for the Petrofes Invitational on Dec. 2 and 3, where the guys will go against many tough schools in the nation. Good luck to all of the wrestlers at their next tournament!