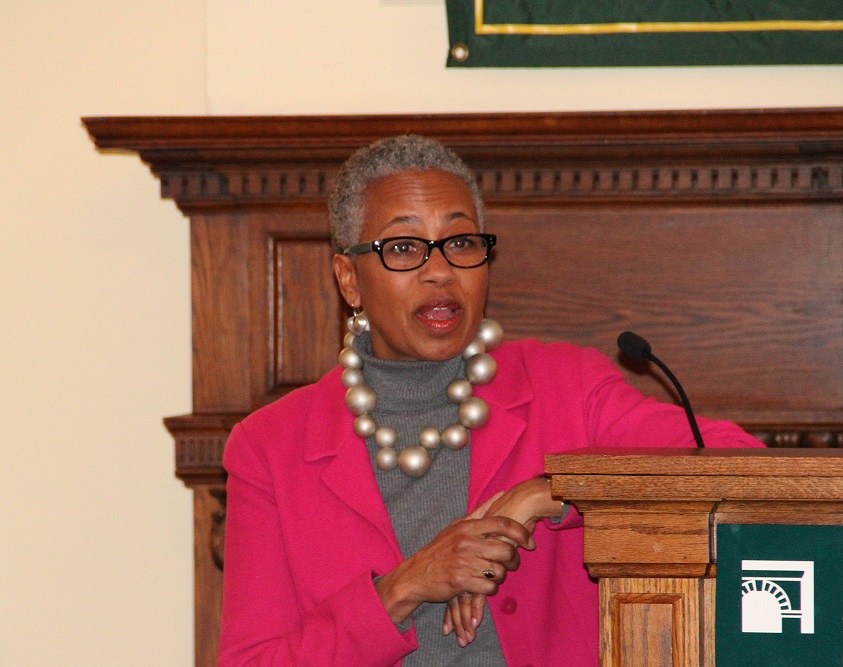 On Tuesday Feb. 25, Dr. Kumea Shorter-Gooden, a Washington D.C. native, visited McDaniel to discuss a few key points on black women’s psychology. While conducting research for her 2004 novel Shifting: The Double Lives of Black Women in America, she and co-author Charisse Jones, who was not in attendance, started The African American Women’s Voices Project. The project interviewed and surveyed 400 black women about various aspects of their lives.

Shorter-Gooden prefaced her lecture with the note that 90 percent of the women were college educated and 94 percent were heterosexual, so the group was not incredibly diverse. However, Shorter-Gooden, a licensed psychologist, believes that many of the concerns voiced by the women were salient not only for other African-American women but also for other groups of marginalized people as well.

Shorter-Gooden’s core finding in the study was that African-American women spend “significant psychic and emotional energy responding to and managing racial and gender bias.” As a result, she and Jones coined the term “shifting” as an explanation of this.

“Shifting refers to all of the ways that black women respond to and cope with bias,” said Shorter-Gooden.

These coping mechanisms manifest in various ways. Behavioral and internal changes tend to be more subtle, such as styling one’s hair differently or altering one’s sense of self. Shorter-Gooden found internal changes in the women to be the most interesting, which demonstrate how deeply racial and gender bias can alter an individual. But shifting can also be fighting back, “making a decision to commit oneself to social justice, protesting or demonstrating, or devoting oneself to a career that allows them to fight the -isms they’ve experienced,” said Shorter-Gooden.

Shorter-Gooden sees shifting as a necessity experienced by all marginalized groups. As a coping mechanism, it can also be harmful. Denying and/or compartmentalizing racial and gender bias may be a way to cope, but even pushing these things to the side takes energy out of people. The consequences are not only emotional damage but also the creation of physical issues.

According to Shorter-Gooden, “Black women who experience more racial and gender bias are more prone to hypertension than those with less.”

There are also higher chances of obesity, anxiety, depression and HIV exposure/diagnoses.

Over the course of interviews and surveys, Shorter-Gooden found four prevailing themes in the issues posed by black women: inferiority, invisibility, image and invincibility.

Inferiority is simplified as a black woman struggling with the “myth of inferiority.” 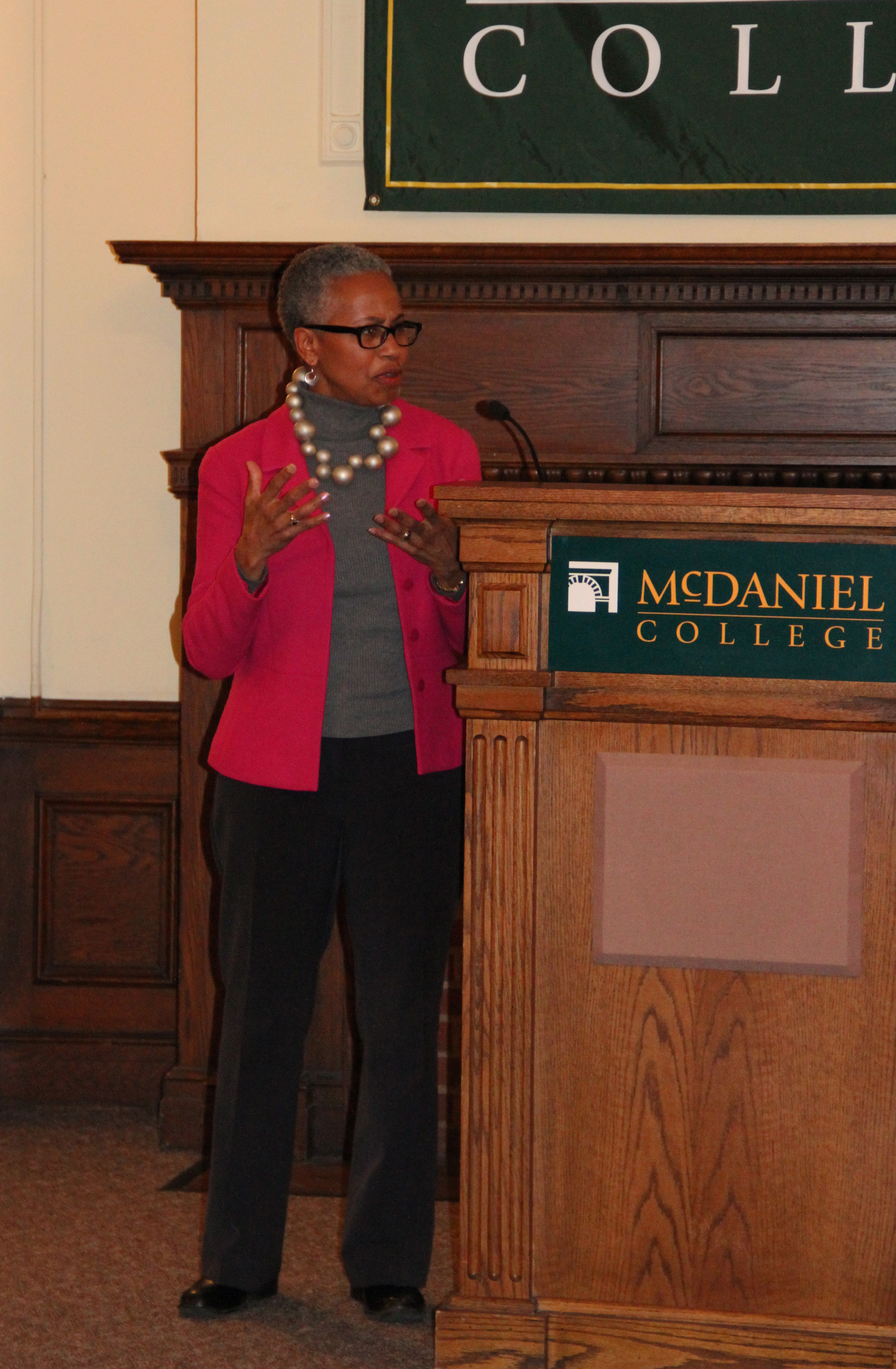 “Many women felt as if they were constantly fighting the myth of not being intelligent. They felt they had to prove other folks.”

Shorter-Gooden relayed an anecdote about a young woman interviewed who felt that she had “to represent every black woman in the world every day of my life.”

These statements were stronger amongst women who lived in predominantly white areas. A trend was discovered of white people being surprised by black women’s accomplishments or proper English. According to Shorter-Gooden, there is a sense at times that if you speak standard English and if you’re competent, you can’t really be black.

While these views are problematic, Shorter-Gooden found them extremely worrisome when these mindsets are internalized. It creates an emotionally draining inner dialogue of trying to figure out “am I good enough?”

Invisibility was the trend of being discounted or unheard, especially when one of the few women of color around. Shorter-Gooden gave the examples of a dean seen only as an expert with minority issues and a social worker always seen as a sister or mother when in juvenile court.

This theme tends to occur in conjunction with heightened visibility. While their opinions are unheard, tokens, or the only black women in a group, are more noticeable and held to a higher standard than those in the majority.

“Beauty is an area where racism and sexism intersect with a vengeance,” said Shorter-Gooden.

In a society where female beauty is overemphasized, beauty ideals have had an interesting effect on the black woman’s psyche. The media’s narrow view of beauty is widening slowly and black women in general have higher body esteem than white women. However, many black women still continue to experience image issues.

For example, there are instances of colorism, or favoring those with lighter skin, occurring within black families. Additionally, more accounts of eating disorders amongst women of color are being reported. Shorter-Gooden felt that as black culture has been more integrated to the mainstream culture, aspects of body acceptance have been disappearing.

“Strong black woman is almost one word,” she said.

The notion that black women are “unshakable” and “never need help” was the last theme discovered in the interviews. When asked about which stereotypes about black women the interviewees were aware of, the five common ones were inferiority, promiscuity, emasculating, criminal and strong. If they had to choose one, the women were most likely to pick strong. Many black women see it as an important part of their identity.

Shorter-Gooden referenced a woman interviewed who stated that “Anything past slavery is gravy.”

But there is a downside to being strong all the time. The strong feel as if they don’t deserve any help.

A large challenge noted by Shorter-Gooden is the fact that -isms don’t stay on the outside, some women internalize these negative views and applied them to themselves. And this impact is noticeable. Black women continue to display higher symptoms of depression yet have lower rates of diagnosis.

Said Shorter-Gooden, “It helps to have other people to talk with about this, so that you can give each other feedback and check in with each other.”

Shoes Across Europe: A Photo Essay