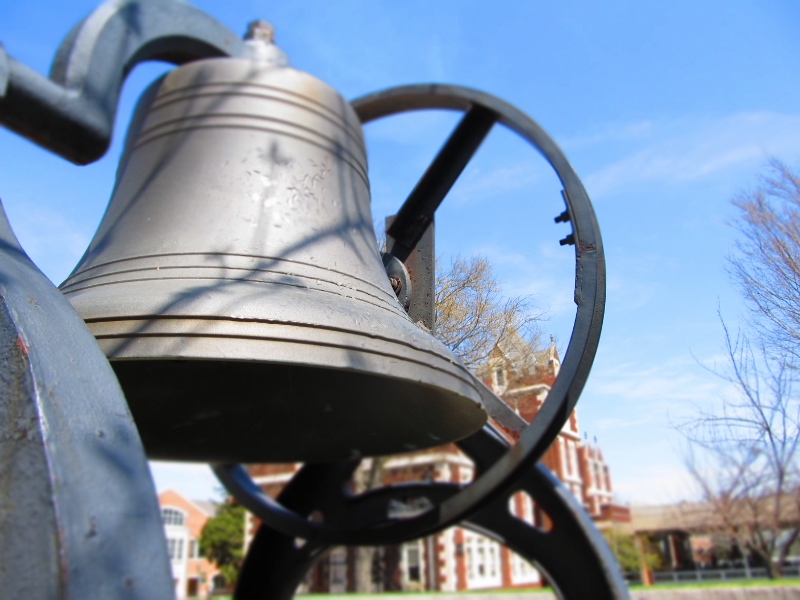 “If you don’t ring the bell in as a freshman, you’ll never ring out as a senior.”

It seems that many students are aware of this McDaniel-centered superstition. There are also many who have never heard such a notion. The annual “ringing in” of first year students after convocation is a simple ceremony meant to herald in a new era in each student’s life. The usually silent “Old Main” bell, which stands atop a patchwork base of cornerstones from past campus buildings, suddenly comes to life with echoing clamors of welcome for the long line of fresh-faced pupils.

The theory is that if a freshman doesn’t “ring in,” they’re doomed to a deferred or nonexistent graduation. The student could transfer, fail too many classes, or just decide that McDaniel College isn’t the right choice for them. Whatever the case may be, the bell supposedly never chimes again for some.

Sophomore Kail Magin doesn’t think the superstition holds any bearing. “I have never heard that superstition, but I hope it’s not true,” she said.

Magin said of the bell-ringing ceremony, “It’s a nice little ceremony, but I don’t think it serves any actual purpose that will be sorely missed by those who skipped the experience. The reason I didn’t ring in is really simple—the line was too damn long and I had better things to do with my time.” Many current students share these sentiments about the superstition and their choice to skip the ceremony as first years.

Even transfer students generally have an opportunity to ring the bell. Senior Kyla Greenhorn described her experience ringing the bell as a transfer student. “It was raining out and they weren’t going to let us [ring the bell], but all of us transfers were like, ‘Hey, it is special. Let’s do this!’ I was excited to ring it. I felt like McDaniel was my home and I would graduate from here. I expect it to be a great experience for me to ring out… it will mean I accomplished what I set out to do.”

Some students may have been just as excited to ring out, but simply didn’t get the chance to before leaving McDaniel. Rachel Hoffman, who graduated from her undergraduate studies last year, explained the circumstances surrounding her rite-less departure: “I did not experience ringing out because of the tight schedule on graduation day due to the move out time limits and the fact that one of the speakers rambled on for an extremely long time—people tried to clap her off the stage twice. I plan on ringing out this year with my Master’s to make up for my lost opportunity last spring!”

Soon-to-be-alumni are looking toward their future processions, across the stage and toward the stately bell. Others, however, are not as interested in ringing the bell again. Senior Becca Wilson said, “I really don’t know what to expect for ringing out, but I kind of don’t want to do it still. I understand the meaning but it’s not really my thing!”

Whether the myth is true or not, many McDaniel students have strong and sentimental memories of pulling the bell’s cord. The bell’s chime echoes noticeably twice a year, in August and in May, as a marker of potential and of accomplishment.

It’s so hard to say goodbye: The Free Press Seniors