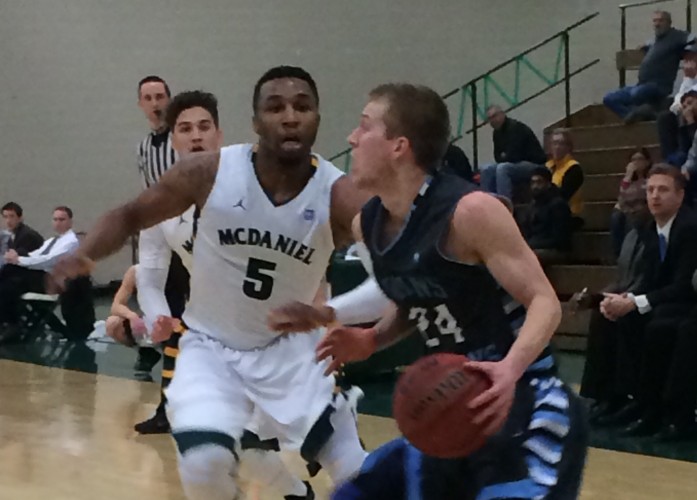 Coming off a one point defeat at the hands of Swarthmore last Saturday, the Terror had a chance to clinch home court advantage in next week’s Centennial Conference tournament against #13 Johns Hopkins (21-3, 15-2) on Wednesday night. However, a second half run by the Blue Jays put McDaniel’s celebration on hold, at least for another three days.

George Bugarinovic, who paced the Jays with 25 points, helped to jump start Hopkins on a 20-8 run to kick off the second half, extending the lead to 18 with just over 12 minutes left, which effectively put the game out of the Terror’s reach.

Junior forward Tim Stewart led the way for McDaniel with 21 points and 7 rebounds, (including three crowd-pleasing dunks in the first half), but it was not enough to overcome the strong night that Hopkins had from the field, shooting over 54% including 8 of 21 from beyond the three point arc.

Stewart, who went 6 of 7 from the field in the first half, briefly gave McDaniel the lead with a difficult and-one with 7:27 left in the first half, to push the lead to two, the largest of the game. From there, however, it was all Hopkins, who would go on to clinch the number one seed (and the all important home court advantage) in next weekend’s Centennial Conference tournament.

Meanwhile, the back-to-back losses push McDaniel (14-10, 9-8) into a tie for fourth place with Gettysburg, with the winner hosting the loser in next Wednesday night’s conference game.

“Of course we wanted to win each (of these) games,” said Senior guard Phil Perry, when asked about the significance of the regular season finale. “Now Saturday is more high stakes than we had planned, but it will be good to have a playoff atmosphere.”