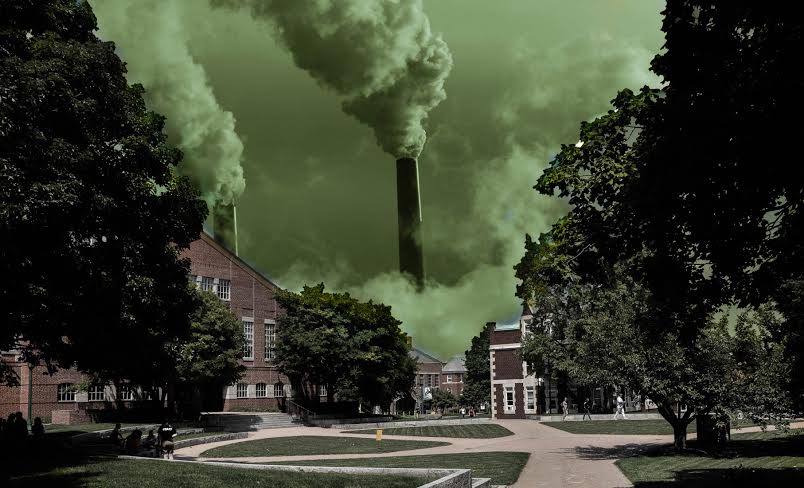 Since many are now saying that the earth is in great danger due to human activities, McDaniel, like many other institutions, has now given up all hope on sustainability and figures that it might as well just help put the world out of its misery.

This movement was set in motion by renowned environmental activist Ag Lore’s newest book, Well, We’re Screwed, in which he explains that “the world is basically finished” and that he just gives up.

Knowing that their highly pessimistic leader could never be wrong, Lore’s followers went to work. Some notable efforts include the destruction of Yellowstone National Park in just four hours and the abolishment of clean energy in the state of Maine.

Additionally, many colleges around the country are now enacting radical anti-environmental policies, such as Protractor State University, which has established itself as a superfund site and will have a large coal pile burning until the end of life on earth. It, like many other institutions, also hopes this end comes soon, but not in the lifetime of any members of its community.

Shortly after this, McDaniel, forever stuck conforming to what other colleges are doing, decided that it must act as well.

Geraldo Steamboat, the new director of anti-environmental affairs at McDaniel has devised great plans for the institution. “I just love the look of smog and desolate, ravaged landscapes in the morning,” says Steamboat, who played a key role in the formation of the Anti-Environment Policy, which is McDaniel’s new policy for dealing with what Steamboat calls “that pesky natural environment. “

The new policy has several major terms. Among them, it calls for the elimination of the sports fields and golf course and to use that land to create a strip mine, the construction of a coal plant on the land currently occupied by North Village, and a new sewage pipe that will dump all of the sewage from McDaniel directly into the Chesapeake Bay.

Steamboat states, “this is progress, just imagine McDaniel’s bright future.” Steamboat is prepared to use nearly 100 percent of student tuition to purchase large amounts of coal, or perhaps Bauxite ore, then burying it around campus so that students can have the joy of digging it up. “It’ll be like a good, old Easter egg hunt, just in the form of a giant strip mine,” says Steamboat.

Workers have already begun the process of removing every plant on campus, since, according to Steamboat, “they’re ugly and they get in my way when I’m trying to drive my hummer across campus.”

As for the future, many expect increased convenience and prosperity for the time being, making no mention to the future. Tina Zaal, a junior majoring in biology, states, “it’s going to be bad when the world falls apart, but we’re fine now, so whatever.” Additionally, Amber Longe, a freshman undecided major, asserts “well, I wasn’t planning on having children any way, so I guess it’s fine. I just hope the pollution kills me before the biosphere collapses.”

Steamboat is optimistic about the future. In fact, he is making plans in regards to the continued implementation of the Anti-Environment Policy. He hopes that students enjoy the strip mine and the coal plant, both of which will have work-study positions. Steamboat even hopes to create a steal mill on campus and develop an advanced fracking program.

Eventually, Steamboat wants to start looking into constructing air conditioners powerful enough to cool off the entire campus to simulate winter once global warming progresses to a certain point.

You’ve Got the Power: One Small Step for McDaniel