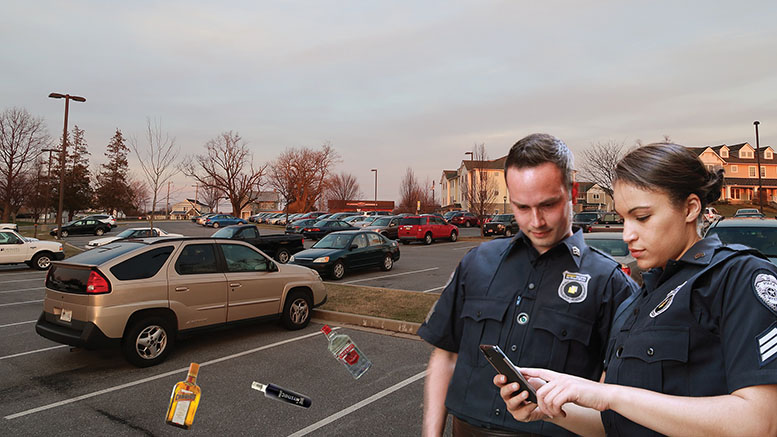 A number of students were surprised Sunday morning to find a fine slip duct taped to the North Village parking lot, citing the pavement for possession of hard liquor. The slip was accompanied by a puddle that smelled vaguely of alcohol, which one student identified as either Goldschlager or Jagermeister.

When reached to for comment, campus police confirmed that at around 11:35 p.m. on Saturday, an officer identified a bottle of liquor broken on the North Village parking lot, between buildings 193 and 195. The officer proceeded to identify the substance as liquor, and radioed the situation in.

“We had a hard decision to make,” said a campus police officer, who asked to remain unnamed, “there was no student in sight to punish, but it was clear that someone was in possession of this substance which, of course, is a serious offense on this campus.”

Around midnight, a decision was reached: with no student to punish for possession, they moved to cite the parking lot itself, given that it had at this point absorbed at least some of the alcohol through cracks in the pavement. The citation was then taped to the pavement, with the hope that it would wake up the following morning, realize its mistake, and pay the fine in full.

“It’s the principle of the thing,” said the officer, “if we let this parking lot get away with possession of liquor, who’s to say others won’t follow suit. Maybe next week the Whiteford lot sees we did nothing and goes and chugs a fifth of Jack. We can’t have that happening.”

While campus police are still unsure how the lot will pay the fine, they attempted to collect refund for recycling the bottle, before realizing that the drive to New York to do so would cost far more than the five cents recuperated. As such, they are considering calling the paving company, and requesting they pay the fine incurred by the pavement they laid.

Students who saw the citation had mixed reactions.

“It’s good that they’re cracking down,” said Senior Jeanine Borx, “these partying parking lots are always keeping me up at night. This is an institution for studying, not partying.”

Sophomore Andrew McDowling, in contrast, saw the action as the continuation of a campus police crackdown on members of the campus community.

“What did that parking lot do wrong besides try and have a good time,” said McDowling, “it only gets to go to college once, why shouldn’t it go and have a night of partying while it can. The campus ‘police’ are just like, Kangaroo cops and fascists man.”

Campus safety is still looking for the student whose bottle of liquor was found, as they note that, seeing as the pavement was under 21, that student provided alcohol to a minor, and will face the proper punishment for this offense.

Facing a New Semester in a New World