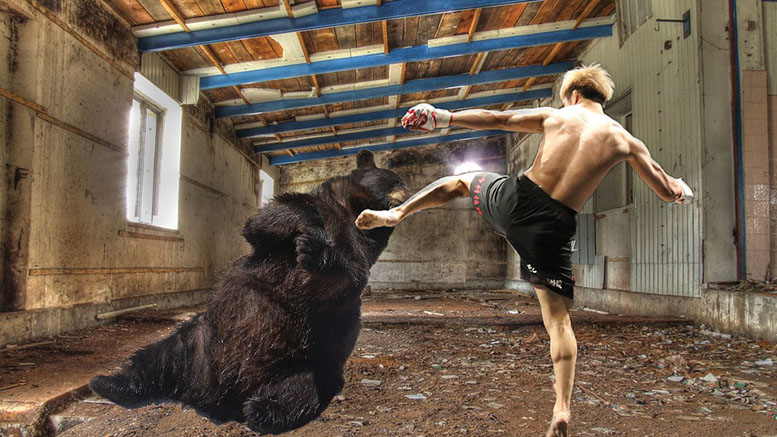 As many students know, intramural sports are a great way of staying active and having fun with friends, without the busy schedule of collegiate sports. In addition to more standard sports such as football, basketball, and hockey, one creative student has started an intramural bear wrestling team.

Jack Ursu, a sophomore exercise science major, decided to form a bear wrestling team, due to his experiences at home. “Growing up in rural Alaska, every high school had a bear wrestling team, it was a way of life,” he stated. Ursu felt that the McDaniel campus lacked this important sport, and founded the intramural team with the help of his roommate, Mark Smith. Although Smith had never bear wrestled before college, he said, “I don’t really do anything else and Jack’s cool so why not?”

Even if you have never seen bear wrestling before, it is quite easy to learn. Students simply fight a bear with their bare hands until either the bear or the student wins. “There really are no rules,” said Kevin Jones, a junior and one of the newer members of the team, “that’s why I love it so much, and chose this rather than a more traditional sport.” In addition to Jones, there are about 15 students so far who have joined the team.

One of the biggest challenges the students faced was actually finding bears. Bears are not commonly found in this part of Maryland, so bears have been specially acquired to fight. “We’ve got some real great black bears to fight. One day we might get to grizzly level, but right now I want to focus on the team’s technique. It’s all about consistency and accuracy,” said Ursu. “I’m very grateful for the college for allowing us to house the bears in the Leighy Room, and providing them with leftovers from Glar.” Some concerns have been raised on the nutrition given to the bears from this this diet, but they love chicken tender Thursday.

Despite the hurdles they had to overcome due to safety concerns, the team will be having its next meeting Friday, April 14 at midnight in Old Gill.

Anyone is free to join, but is advised to remember that the college is not responsible for any injuries caused during intramural sports. If you are interested in joining please email Ursu or Smith, or shout “bear” in Red Square. The bears will find you.