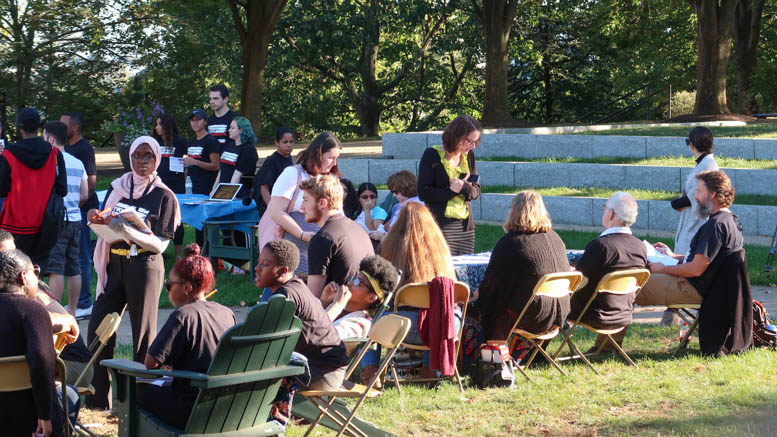 Emotions ran high in Red Square Thursday, Oct. 4 as the League of United Latin American Citizens (LULAC) and the Office of Student Diversity and Inclusion (OSDI) hosted a DACA Teach-In, part of DACA week at McDaniel. The event aimed to raise awareness about Deferred Action for Childhood Arrivals (DACA).

Jasmin Chavez, founder and president of the McDaniel LULAC chapter, said the event was to “inform and educate the McDaniel community about what DACA is, what they can do to help, and what as students themselves can do now that the renewal date is literally tomorrow.”

Chavez and other members of LULAC expressed hope that the event would not only inform people about DACA, but also inform them about passing the DREAM (Development, Relief, and Education for Alien Minors) Act, which would grant illegal immigrants a pathway to citizenship.

DACA, an immigration policy enacted by former President Barack Obama through executive order in June 2012 and rescinded by President Donald Trump in September 2017, provided immigrant youth who entered the U.S. illegally protection from deportation for a period of two years as well as a work permit.

The rescinding of DACA has been met with disappointment by a majority of Democrats as well as many Republicans.

The event had co-sponsorship from the Progressive Student Union, Social/Civil/Human, Gender & Sexuality Alliance, the Black Student Union, Africa’s Legacy, and Intervarsity, and tables were present to provide resources to students looking to contact their Congress members.

The event came at a time when race is an increasingly sensitive issue.

Jose Moreno, Director of the OSDI, revealed personal experiences that many minorities in America are all too familiar with. He discussed his life as a Puerto Rican American, describing that despite being born in Puerto Rico, he is often not seen as a true Puerto Rican because he was raised in America. On the other hand, he relayed experiences in which others didn’t view him as American because of the color of his skin.

Sociology professor Dr. Linda Semu, who serves as the faculty advisor for Africa’s Legacy, stressed the idea that the U.S. is a country of immigrants. The national media has convinced Americans that immigration in the U.S. is an issue strictly restricted to Hispanics, but Semu elaborated that DACA affects immigrants of other backgrounds.

Semu made another point that enlightened the crowd: “In Maryland, in Montgomery and Prince George’s Counties, they have a very high proportion of potentially eligible youth who are of African descent.”

Semu closed her speech by encouraging students to make change. “I don’t believe in [politicians’] willingness to do what is right. I believe in the ability of the people in our communities to put pressure and to organize and make the change that we need to see.”

The keynote speaker of the teach-in was Jonathan Jayes Green, a DACA recipient himself. Jayes-Green is the founder of the Undocublack Network (UBN), which advocates for undocumented black immigrants and tells their stories.

Jayes-Green relayed his story as a Panamanian immigrant. The son of a construction worker and a caregiver, he explained his unique upbringing. Jayes-Green described that he was admitted to several four-year colleges, but couldn’t receive federal financial aid as an undocumented resident, and was charged out-of-state tuition rates.

Despite this obstacle, Jayes-Green was offered a scholarship from Montgomery College, a community college, and he accepted.

Jayes-Green explained that his first year at Montgomery College introduced him to his call to fight for immigrants’ rights after witnessing a failing vote for the DREAM Act. Although he was disappointed, his energy never ceased, and as he began to gain more experience in advocacy, he was introduced to intersectionality and transformational solidarity.

Jayes-Green didn’t use his time at the podium just to rally support for DACA. He also spoke about oppression and injustice that black citizens go through that immigrants could sympathize with.

Jayes-Green proclaimed that “there are close to 600,000 black undocumented folks that experience a criminal justice system and the immigration system as one. For us, immigration is a racial justice issue. Immigration is a black issue in particular.”

Jayes-Green also took the time to address some the experience black citizens have with law enforcement officials.

Jayes-Green iterated that at the end of the day, the issue of immigration is systemic, not individual.

Is Your Resident Assistant a Snitch?