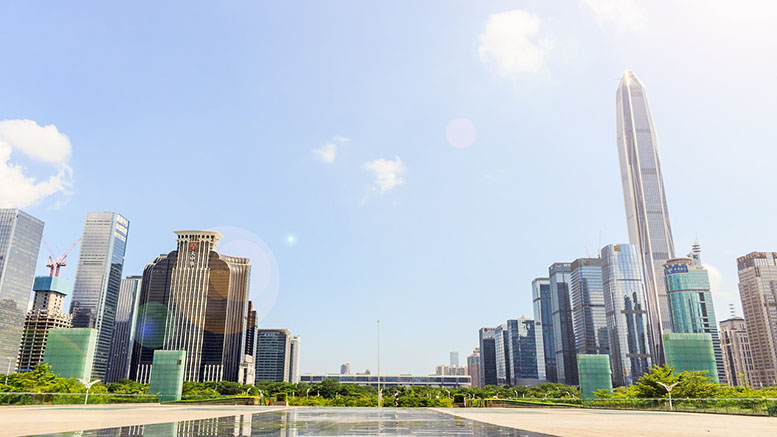 Shenzhen, located in southern China just outside of Hong Kong. It is one of China's most successful urban development projects and today one of its main economic centers. Image courtesy of Pixabay user Buihuy89.

In April 2017, China made a major announcement: the creation of the Xiong’an New Area, which has been promised to become an eco-friendly megacity covering 2,000 square kilometers.

Though projected to contribute less than half a percentage point to China’s annual GDP growth, Xiong’an has gained the crucial support of Chinese President Xi Jinping, who just entered another five-year term. It has been predicted that this development will cost up to the equivalent of $580 billion over the next 20 years.

It was this major shift that students, faculty, and staff alike reflected on during a talk by Ling Zhang, a historian of Boston College, on Oct. 12. The event, “Ponds, Paddies, and Frontier Defense: Yellow River in China (960-1127),” part of Global Climate Change Week at McDaniel, gave historical insight to the region that is to become this metropolis.

Zhang revealed that the region of Xiong’an is quite poor today. Nevertheless, the policy of the People’s Republic of China since the late 1970s has been “Coordinated Development,” that is, to develop markets in urban regions in order to create wealth needed for further development in poorer, rural regions. Three highly prosperous hubs of China—Beijing, Shenzhen, and Shanghai—have created vast wealth while some regions, as is with Xiong’an, have yet to see substantial growth.

Immediately after the announcement, traffic jams clogged roads leading towards the region and housing prices tripled; the government had to halt these transactions to keep the situation under control. Meanwhile, local landowners are said to have hit the jackpot.

Zhang’s talk, however, emphasized the ecological implications for the project, discussing imperial action in the region during the Song Dynasty approximately 1,000 years ago. In this time, much of the land was involved in a imperial water project: due to its location on the periphery—the frontier—of dynastic rule, a “Watery Great Wall” was to be constructed to heed away invading Khitans from the North. Thus, for defense purposes, the Yellow River was diverted northward, ponds were enlarged, bodies of water were deepened, etc.

Today, this region, though containing much less water, is marshy, and still highly agricultural, and ecotourism has been on the rise.

Located 62 miles from Beijing, Xiong’an is intended to relieve the burden of the Chinese capital, which struggles with air pollution, water shortages, and overcrowded highways, among other problems. Universities and businesses are now being encouraged to move operations to this new city, along with portions of Beijing’s more than 20 million residents.

Xiong’an has been painted as a highly eco-friendly urban plan, lacking the air or water pollution of Beijing or Shanghai, respectively, and to have the interest of locals at heart, who it is said will benefit economically from the change.

Certainly, there is no surefire manner in which to develop China, as other similar projects have been unsuccessful, but Zhang’s talk highlighted the importance of historical insight when engaging in such endeavors. In this light, local and environmental interests should have seats at the planning table to promote fair, sustainable development.

How one camp is changing the lives of many