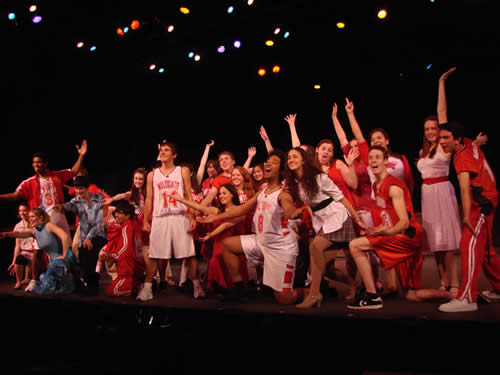 I just hate when something is so obviously created to make a profit that it seems to abandon all creativity and reflection. “High School Musical” is a prime example of this.

On the surface, it seems that this movie seeks to teach viewers that they can be whatever they want to be, regardless of what they currently are. Yet, characters in this movie (because I refuse to call it a film) achieve their dreams by cheating in a game of manipulation while also continuing the activities they wish to discontinue and/or were forced into.

“High School Musical” confuses us with its opening scene. We first see a ski resort on New Year’s Eve accompanied by the same whimsical music used in every holiday movie ever made. This messes with our expectations. We then see the main character, Troy, and his father playing basketball and not wanting to stop despite the mother’s wishes. Yes, we must establish that regime of masculinity, or at least get a sense of Stockholm Syndrome to set in.

Troy is then directed to the “kids’” New Year’s party, where secondhand embarrassment begins to disrupt us as the viewers. The emcee asks “Who’s gonna rock the house next?” Our discom0fort is amplified by this, as the previous song was country, and we’re getting disheartening flashbacks to awkward middle and high school dances.

Unsurprisingly, Troy is “forced” to sing. His singing partner, Gabriella, is a stereotypical characterization of a sheltered girl — she’s reading a book when forced to sing and says her only experience singing is from “church choir.” In a horrifically basic act of foreshadowing, the emcee says, “someday you guys might thank me for this… or not.” Then we are subjected to their singing, their (particularly Troy’s) pretentious demeanor while doing so, and their bad lip syncing.

When school starts up again, we see all of the stereotypical cliques reconvene. Surprisingly, we are introduced to the us/them mentality utilized throughout the film by Taylor, a stereotypical characterization of an intelligent person, who says, “Beware — the zoo animals heralding the new year. How tribal.”

We also get to see the theater teacher (Ms. Darbus) on a power trip, possibly taking out her anger at the world on students. However, we know this is a wink to the intended audience, who presumably get frustrated with their teachers. This is an attempt at #relatable content, if you will. The teacher hates cell phones and assigns detention en masse.

Just like “magic,” Gabriella transfers to the same school, East High School, as Troy, and they quickly run into each other. We’re then introduced to who we assume is the antagonist, Sharpay, who dominates the school’s theater program and deliberately makes her name take up a whole section of the audition list. We’re mainly annoyed by how she says “toodles” un-ironically. Another stereotypical character.

Then it’s time for basketball practice. The basketball players criticize the upcoming musical at the school then immediately proceed to break into song. Typical.

There’s also the stereotypical arts vs. sports war going on. Fittingly, the theater department and basketball team have a standoff, which the sports side is winning. Ms. Darbus even asks the principal, “If these were theater performers instead of athletes, would you seek special treatment?”

This brings up the theme of separation between social groups again. There are references to a distinct “cheerleader language,” talk of “subspecies,” and repeated references to others being “alien,” including a reference to a “mothership.”

At theater auditions, only Sharpay and her brother Ryan audition as a couple in a song that sounds exactly like everything else spat out by the sector of the Disney conglomerate in charge of music. When seeing these two, we can’t help but wonder if their insecurity at having any competition stems from a realization that they’re nothing without their meager high school theater program.

Their insecurity is heightened when a callback is issued (due to Ms. Darbus hearing Troy and Gabriella sing directly after auditions). Sharpay states, “How dare she [Gabriella] sign up. I already picked the color for my dressing room.” Ryan adds, “She hasn’t even asked our permission to join the drama club.” Their regime of insecurity is cracking apparently.

As this is a Disney product and a musical, another song quickly ensues. Characters are reminded that “If you wanna [yes, even the film’s official subtitles spell it ‘wanna’] be cool, follow one simple rule — don’t mess with the flow, no, no.” This means characters can only be one simplified architype, and like nothing outside of it. You see, in life we do this because we don’t know what to do. Without a pretend identity we feel like nothing, as we see in Ryan and Sharpay.

So then people begin confessing that they like “stuff that’s not their stuff,” as Sharpay puts it. Sharpay and Ryan assume that the “jocks” are trying to help Troy, and Ms. Darbus assumes Troy auditioned as a joke. What a lovely series of standoffs.

As the movie progresses, the basketball team and members of the scholastic decathlon team up to get Troy and Gabriella to no longer wish to participate in the musical. Through their own act of manipulation, Troy’s teammates get him to say the musical is nothing, and that he will forget Gabriella, which decathlon members show to her. They make Gabriella cry then ask if she’ll join the decathlon. Unfortunately, this triggers another song by Gabriella.

Yet, just like that, both the basketball team and the decathlon members decide they must help Troy and Gabriella pursue the audition. This is confusing since it happens so randomly. The movie loses us when characters seem to be affected by guilt — we’re used to a society in which manipulation is fixed on a single end result without compassion.

Meanwhile, Sharpay and Ryan get Ms. Darbus to move the auditions to a time the conflicts with the “big” basketball game and decathlon, giving them their own edge in the game of scheming and postponing the realization that life is meaningless.

To get around this, decathlon members hack into the gym to force an evacuation and cause a beaker to smell bad and fizzle over in the decathlon so that Troy and Gabriella can make the callback. So, essentially, they “win” by being part of the side that more effectively cheats. In reality, this would go down horribly if such hacking was uncovered.

So then Troy and Gabriella win the basketball game and decathlon, and get the lead roles in the musical because they played dirty in response to many others playing dirty. But what’s important is that they did it and won.

The movie closes with another song, claiming “we’re all in this together.” Eh, there are still losers. Many losers. But they’re not included in this bit, other than Sharpay and Ryan, who are somehow not bitter. Maybe they, too, have broken and are too numb to process what has happened to them.

Either way, history was written by the victors.

Letter to the Editors