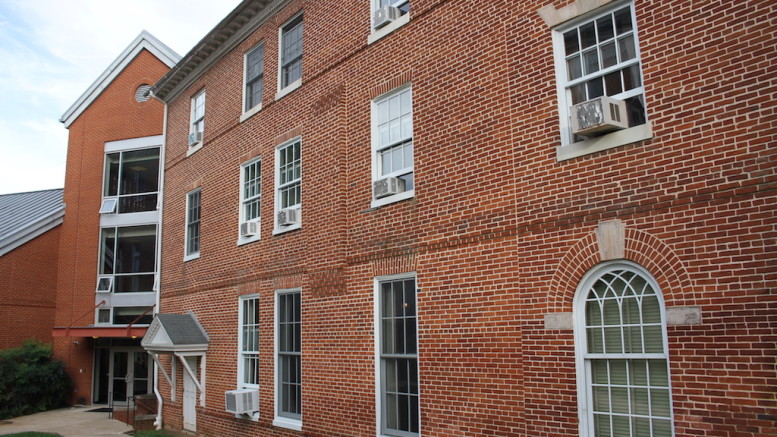 Air conditioning is often reserved for spaces like practice rooms for musicians in Levine Hall (above) or offices. (Emma Carter / McDaniel Free Press).

As a new school year begins, students are presented with both old and new problems. One issue that never seems to go away is the heat, and at McDaniel College, one of the first observations that students often make is the lack of air-conditioned buildings.

Currently, the majority of residence halls do not have air conditioning. This includes Rouzer (with the exception of the fourth floor), Whiteford, Albert Norman Ward, and McDaniel Halls, the Pennsylvania Avenue houses, and Forlines House. The halls that do have some form of air conditioning are the Garden Apartments, the North Village apartments, and Daniel MacLea and Blanche Ward Halls.

The only way students who do not live in dorms with any air conditioning can get a window unit in their dorm is if they have a medical condition. Once they get a doctor’s note, the College then reviews the document to determine if they are eligible to have a window unit.

Due to the lack of air conditioning, many students find it challenging to endure the first few weeks of the fall semester. This has caused students to find activities to avoid going back to their rooms.

The biggest reason why the College has not been able to fix this solution is because of money, admitted Michael Robbins, the associate dean of students and the director of residence life and student engagement.

“[Switching] over the buildings to air conditioning would require a pretty big capital investment,” Robbins said.

When the College tried to get a price quote on installing central air conditioning in Whiteford, the cost was over $1 million, he said. This is because many modifications would have to be made to the building.

Robbins also said that installing air-conditioning window units in every room would not be any easier, since most of the buildings do not have the electrical capacity to hold that amount of power.

He believes that air conditioning is more of a want than a necessity since it is only for the first and last month of the academic year.

“It’s hot, it’s frustrating,” Robbins said. “I grew up in a house without air conditioning; it was hot.”

Students, however, are conflicted on the issue.

Anniki Murray, a sophomore living in McDaniel Hall, said she has faced many difficulties because of the hot living conditions.

She even mentioned that taking cold showers does not work because of the amount of humidity in the bathroom.

“During the hot seasons, air conditioning is definitely a necessity,” said a resident assistant who asked to remain anonymous. “Maryland is a hot, humid place.”

She went on to say that because the dorm she oversees does not have air conditioning, it negatively affects some of her residents. For example, one of her residents had to take her service animal back home until the weather cooled down.

Even though many students find it hard to adjust without air conditioning, there are some students that are not fazed by the heat.

Junior Elise Simons has not allowed the weather to affect her during her time at McDaniel. Although she currently has air conditioning and had a unit her freshman year, she did not have air conditioning her sophomore year.

“It honestly wasn’t that big of a transition,” said Simons.

During her sophomore year, she said she was satisfied with having the window open and using her box fan to keep cool.

According to Robbins, there has been talk in the past among student groups and President Roger Casey about installing air conditioning in every residential building. But Robbins said the students thought it would be better to endure the heat than invest millions of dollars to keep the buildings cool for just the first and last month of the year.

An Interview with Candidate Nancy Wallace