Homecoming on the Hill has always been packed with events that McDaniel and Western Maryland College newspaper staff have put into print – here are the highlights from 15, 30, and 50 years ago.

The “abnormally warm weather” for this November celebration was the icing on the homecoming cake, according to the account of the Phoenix’s news editor at the time. Aside from the ideal temperature for tailgating – which cost $5 – Green Terror football defeated Franklin and Marshall’s Diplomats 21-7, and the homecoming parade down Main Street, an annual tradition, drew a crowd. The preceding Spirit Week included a showing of the film “Bring It On” sponsored by the SGA as well as a bus trip to Spring Grove, Pa.’s Haunted Mill, which one student was quoted saying had her “scared [expletive].” 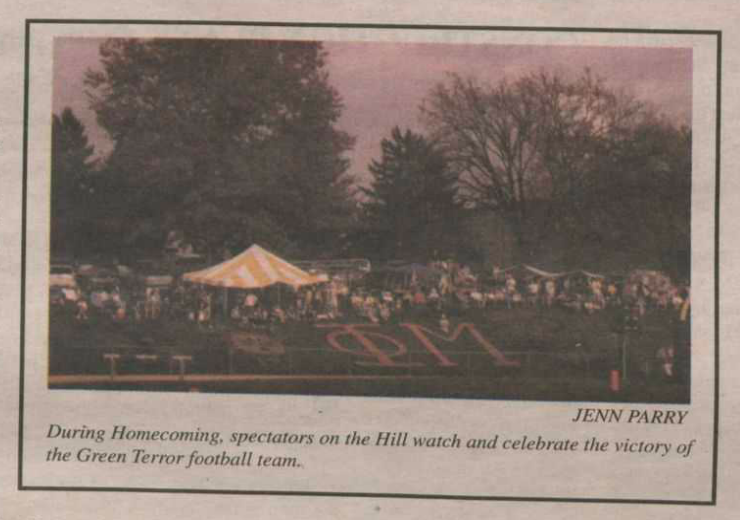 This staff writer actually only highlighted one “down” from Western Maryland’s homecoming in 1988: Western Maryland’s football team lost to Dickinson’s. The year’s parade winners – floats were awarded first, second, and third prize – included the Sigma Phi Epsilon fraternity with their “Ghostbuster”-themed car, which “came complete with four Ghostbusters.” 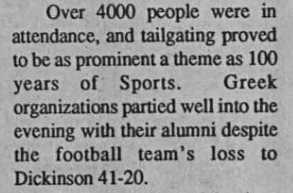 50 years ago, this writer recapped Western Maryland’s homecoming weekend festivities, which most notably saw an SGA-sponsored concert featuring singer Mitch Ryder and appearances from local political candidates at the parade. The Green Terror defeated Lycoming College in the football game, and the College held a homecoming party, which was for the first time in 1968 free for students, faculty, and alumni, and which was “enjoyable from all angles.” 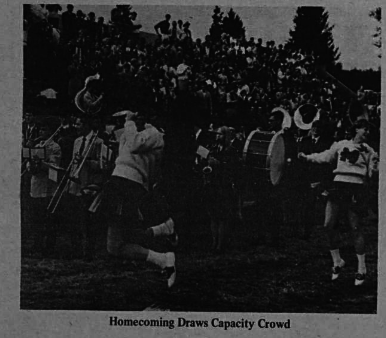 Homecoming a Sopping Disappointment for Fans

President Casey is positive about widespread changes this year

The View From Here: A Photo Essay