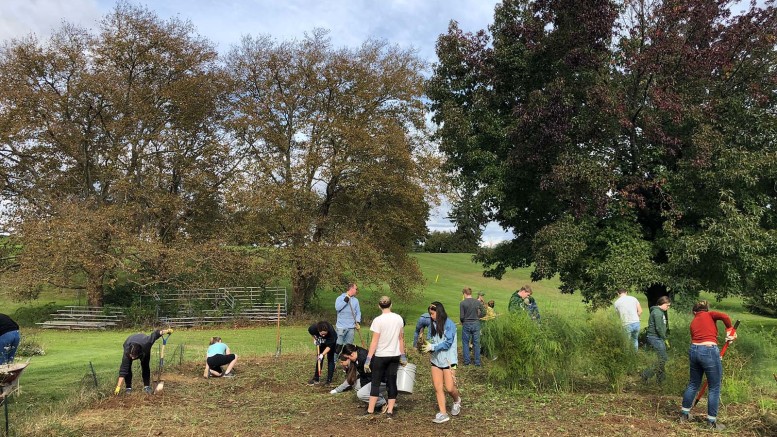 Not even two months into the semester, Elly Engle, professor of environmental studies, was able to coordinate multiple student groups to help weed the campus garden and cover it with mulch to prepare for her spring classes to use in their studies. (Photo courtesy of Elly Engle).

Elly Engle, Ph.D., joined the environmental studies department this fall less than a year after earning her doctorate from Pennsylvania State University.

“I remember exactly where I was when this job posting came through my email,” she said.

She was sitting on the floor of her apartment living room last fall with her husband and said, “I found my job.”

“[It was] the only job I sat down and wrote a whole new cover letter and application [for] because I was so excited,” she said.

For Engle, her role at McDaniel is a dream come true.

“I am one of those weirdos that kinda always knew what they waned to do,” she said. “It’s cheesy, but ‘The Lorax’ was super influential.”

The hobby distance runner has taken her passion for the outdoors and for fostering community and hit the ground running in her first semester.

“I was brought on board to get the student farm up and running at Singleton-Mathews,” she said. “That’s the big overarching billboard that I’m driving towards.”

Engle’s drive started as soon as her interview did.

“The first thing we did my interview day,” Engle said, “was [environmental studies professor Jason] Scullion picked me up at the hotel and we went for a hike [at Singleton-Mathews.]”

Though she didn’t expect that the interview for her first tenured-track teaching job out of graduate school would be in a pantsuit and hiking shoes, it all felt right.

“I was just so excited,” she said.

Engle grew up in farmland about 30 miles east of State College, Pa. and never thought she would go to Pennsylvania State University. In fact, she refused to go there for her undergraduate degree. But after graduating from Juniata College, she found herself enrolled in the University’s rural sociology program.

“I don’t regret it for a second,” she said. “The people I met there were amazing.”

Much of Engle’s work on her Ph.D. thesis, which focused on environmental justice and community development of rural community gardening in central Appalachia, had her out meeting new people, getting to know them and their gardens.

“It’s amazing when you’re standing in someone’s garden what you’ll talk about,” she said.

Engle did a lot of this field work in the summer of 2016 leading up to the Presidential Election. Her garden conversations, many of which were in historically coal communities, opened up a lot for her.

“People just really want to be heard and they want to be proud of what they do,” she said.

She noticed that the conversation around these coal communities gets stuck on coal itself rather than the people.

“[My research was about] trying to feed people and create new jobs,” she said, noting that people can always grow their own food, but run into problems when it’s grown on land that’s destroyed.

In analyzing community gardening programs, Engle was able to merge the field of environmental studies and sociology.

“[I] used social theory to explain why people do what they do,” she said, speaking of how people interact with the environment.

Engle incorporates social theory in the design of her classes, too.

“[I’d like to] inspire students to understand that our food system is one of the few places where we have a lot of individual control,” she said. “Where we can have the biggest impact individually and positively.”

Part of this effort has been through developing new courses for her students. Some of these include sustainable agriculture and social theory, as well as ideas around food insecurity and an environmental literature course.

“There’s so much to be learned about ourselves by diving into literature like that,” she said.

But another part, one that drives Engle, is connecting with students over projects.

“I’ve been so inspired by the responsiveness of students,” she said.

At one point, Engle thought she was going to have to rally students to start a campus organization to help with her projects. She quickly found out that wasn’t the case.

“I thought I was going to have to do a lot more work to build that student mobilization,” she said. “I was so excited to have [a] conversation with [Green Life President] Cari [Witherow] in the first few weeks of the semester.”

Engle also hopes to hire students as early as next summer to work for and with her in the campus garden.

“I get to be so much more hands on [at McDaniel] than I would have anywhere else,” she said.

Being hands on wasn’t always a good thing in her academic life, she said. Her advisor throughout graduate school always told her that she was doing too much applied work and not enough research. She was always seen to be too program-oriented and not research-oriented.

But Engle’s work style has treated her well so far in her academic career.

“People do not walk out of graduate school and walk into positions like this,” she said.

Like all major life changes, Engle’s first semester on the Hill hasn’t been all a breeze.

“It’s been a little intense for lots of reasons,” she said, citing being away from her husband, adjusting to single pet parent life, and living in a new state.

“What makes it worth it is getting to come into class and working with students,” she said.

Even working in one of the smaller-staffed departments on campus hasn’t distracted Engle from her work.

“What I’ve found [is that] those challenges are just opportunities,” she said. “It’s exciting to be in a place in that much demand.”

Though Engle teaches in the environmental studies department, she stresses her open-door policy to all students and her interest in getting those from all interests and majors involved in environmental projects.

She’s already taken on the role of Green Life advisor, despite the fact that faculty members are excused from service work like this when they’re first hired.

“It was just too important to me,” Engle said of the organization and their mission.

Students can visit Engle in Lewis 223.