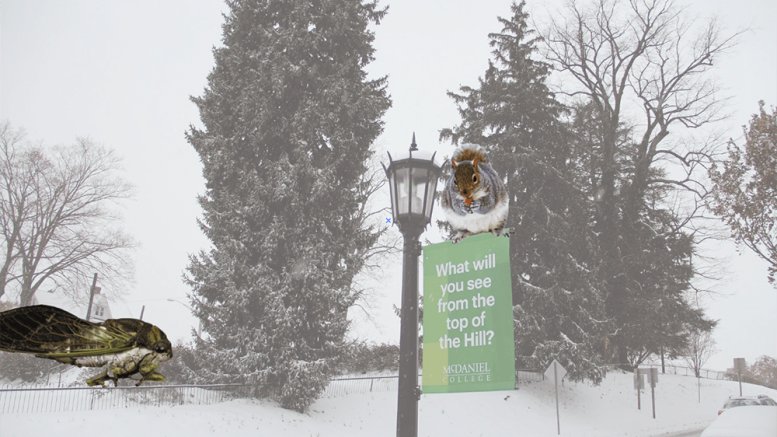 It’s no secret that McDaniel is home to an abundance of squirrels. They’ve managed to coexist peacefully—for the most part—with students for more than a century, occasionally earning degrees and provoking conflicts between fraternities. The squirrel population is reluctantly beloved by the students and staff.

The return of both McDaniel’s most infamous squirrel and the newest cicada brood could change this for years to come.

Cicadas are, in the words of senior Mario Fernandez, “one of the worst things to happen to campus.”

Some might notice, lugging their backpacks up and down the Hill, holes poking out from the greening grass. These, dear readers, are the birthing places of the reviled cicada. The newest brood, marked Brood VIII by an enigmatic cicada expert known only as Dan, only emerges every seventeen years. Dan notes that Brood VIII is found mainly in Pennsylvania, Ohio, and West Virginia, but there are possible stragglers in Maryland. McDaniel’s campus appears to be a nest of these stragglers.

The problem could be mitigated if it were only the army of cicadas on the scene. Their signature buzz, a mating call made only by the males, is obnoxious and gut-wrenching, but with proper mental fortitude it can be combated. Even worse is their molting process, where their exoskeletons stick to branches and buildings only to fall on unsuspecting students.

The true danger, though, comes from the cicadas uniting under one leader: Squaug.

Some seniors might remember Squaug from an article written in 2016 by Danielle Fatzinger. Squaug, who was infamous for hoarding every lost ID card and key on campus, was thought to have vanished after attempts to capture him in 2016 ended in failure. However, junior Ryan Michelson recently stumbled upon a Squaug hoard behind Elderdice Hall, along with something even more terrifying: an entire army of cicadas.

According to Michelson’s report, their screeching can only be described as “a noise that bounces around in your head, even after you’re gone.” Fortunately, Michelson managed to escape the brunt of the attack and is recovering nicely. His discovery comes with a dire warning.

Students and staff alike must be ready for the inevitable cicada invasion of campus. Trust no insect. Trust no squirrel.

A vibe-centered approach to dating