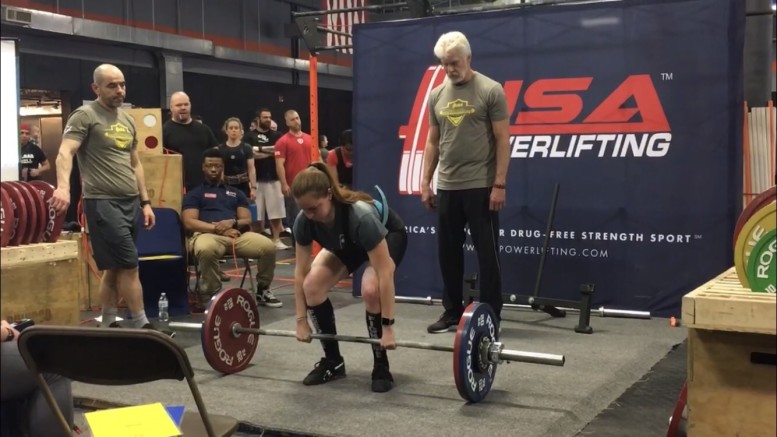 The third-year social work major is a powerlifter, which means she participates in competitive weightlifting where she must attempt different types of lifts in a set sequence.

Jeffers is fairly new to the powerlifting game.

“I started messing around with weights about two and a half years ago. It wasn’t until I took Principals of Strength Development with Professor Bryant that I started to take it seriously,” she said.

During the span of the course, she took several trips to Bryant’s gym, Westminster Strength and Conditioning. Bryant is also one of her biggest influences.

“She’s a mom of four, she trains all the time, and she has her own gym,” Jeffers added.

For Jeffers, powerlifting is an extracurricular that requires extreme dedication. She goes to the gym about three times a week, and she spends anywhere between one and a half to two hours there per trip.

“I spend most of my evenings and mornings doing homework, and I go to the gym during the day before or after classes. I have my days very planned out, which really helps with balancing work, school, and lifting,” she said.

“One of the biggest misconceptions regarding strength training, especially for women, is that you’ll get bulky, but the answer is no, you won’t. Women’s bodies just aren’t made to bulk up like that,” Jeffers said. “Another big one is that a lot of people are afraid of injury, but if you use the right form and are careful, you’ll be fine!”

According to Jeffers, McDaniel does quite a good job of accommodating weight lifting and encouraging powerlifting.

“We have a nice gym, with eight racks for squatting and the correct safety measures,” Jeffers said. “We have decent equipment, especially compared to other schools of similar size. Plus, the people are very helpful.”

After spending 15 years as a dancer, Jeffers wanted to get a glimpse of something else.

“I tried body building at first, but that wasn’t my thing. I wanted to workout to feel strong, not just look strong,” she said. “Nothing compares to feeling strong. It’s a motivator. When I train, the grit and determination transfers to school, and it helps me push through.”

This is Jeffers’s third year at McDaniel, but she is graduating early with her social work degree. She also self-designed a health and wellness minor, which focuses on exercise and nutrition.

As for her powerlifting career after graduation, Jeffers is still uncertain.

“I plan on continuing to powerlift, and possibly continuing to compete, but I don’t know for how long or when,” she said. “I do plan on going to graduate school for social work, and maybe when I’m a little further in my career conducting some of my own research on mental health and exercise, but I haven’t really decided for sure.”

Correction, May 21: This article was originally published with the title “Emily Jeffers profile” on May 27. It has since been edited.