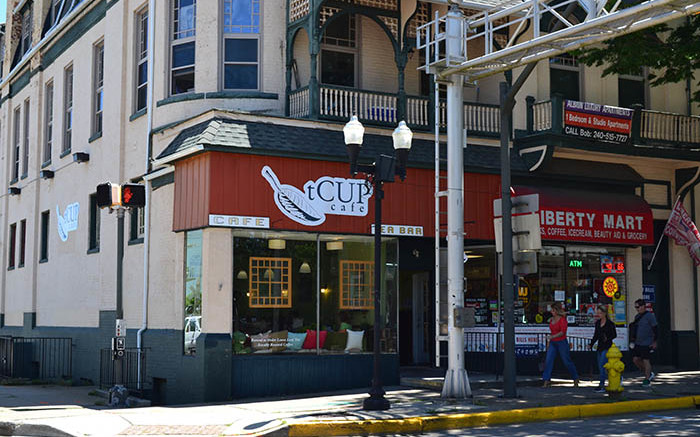 After nearly eight months of renovations, unexpected delays, and countless challenges along the way, followed by two hectic weeks of a soft reopening, the tCUP Café is finally ready to celebrate all the hard work with a grand reopening. On July 25, the café will join the Chamber of Commerce to celebrate its new brand and all the recent changes.

“We had no idea what to expect [on the first soft open day] and feel extremely grateful to the community for their support,” said co-owner Tash Otto. “It was an exciting and emotional day filled with welcoming smiles, lots of hugs and stories, and a very busy crew.”

Located at 1 E. Main St., the café, formerly known as the Cup Tea Bar and Café, closed last October for what was originally anticipated to be a couple weeks of much-needed renovations. These few weeks soon turned into several months as owners Tash Otto and Traci Malinoski were forced to renegotiate with contractors and face numerous setbacks.

“When you go skiing, you expect things that could go wrong would be slipping and falling or hitting a tree or something. You don’t expect to be abducted by UFOs,” said Otto. “And this was kind of like that. We had no idea so many things could go wrong.”

Despite frustrations over the prolonged close, Otto and Malinoski were encouraged by consistently receiving an outpouring of support from loyal customers eagerly awaiting the reopening. Facebook posts on the tCUP’s official account explaining updates received hundreds of supportive comments.

“This was all done by just word-of-mouth and Facebook advertising,” Otto explained. “We didn’t even know if people would remember we existed. And it’s just heartwarming to see everyone coming together and supporting us.”

After months of anticipation and false starts, the tCUP Café finally welcomed back Westminster’s tea lovers for a soft reopening on Tuesday, June 11. The café saw over 100 customers that first day. And it’s no wonder; though the café still features classic favorites like an extensive tea selection and relaxing atmosphere, Otto, Malinoski, and their staff also implemented some exciting new changes.

During the eight-month closure, they tore down the stage in the bay window and pushed back the kitchen to open up the space more and allow for additional seating. They installed new floors and repainted the walls. They also created a new logo and name.

“We wanted to rebrand, but also keep the familiarity of the name and carry on and honor [the previous owner’s] visions,” Malinoski said. “People used to already call us ‘The Tea Cup’ or just ‘The Cup’ so we built off of that.”

The new logo, name, and brand came together with the creation of a new website as well.

The two-week soft opening served as a valuable training time as the staff became accustomed to the physical changes in the new kitchen and grew comfortable with the layout of the space.

“We still need to make sure training is thorough for the most efficient way to do things,” said Otto. “Now that the counter is half the size, the staff need to be creative in how they navigate.”

The café will close for about a week beginning on June 28 to fine-tune some final electrical and plumbing repairs. During this time, Otto also hopes to create a set schedule for his staff and ensure the point of sale system’s menus are as efficient as possible.

The tCUP will reopen July 9 for another soft opening, with the grand reopening celebration scheduled for July 25. Though the specifics for this event are still being determined, Otto is working on inviting local bands to perform and both owners are looking forward to a ribbon cutting ceremony. They’ll also have free samples of their most popular teas and flatbreads, as well as their new signature cupcakes.

Looking to the fall, Otto and Malinoski are hoping to focus more on McDaniel students. They’re excited to potentially partner with different departments for fundraisers and collaborate with student groups for a “tCUP Cabaret,” which could feature theater and music performances, as well as art exhibits.

Moving into the holidays, in the September and October time-frame, the tCUP might also look into staying open later to connect more with McDaniel students, Malinoski said.

“We are working on instituting a McDaniel Bucks program and we still offer our McDaniel students free coffee or tea when they bring their own McDaniel branded beverage container,” Otto added. “There is much greater access to Wi-Fi, USB and power hookups, [and] a lounge area up front with a space for students with laptops to relax with their tea or coffee, or create on our chalkboard.”

First-year students visiting campus for summer McDaniel Local programs will have the first chance to visit the new café. By the fall semester, when the rest of the student body returns, Otto and Malinoski hope the tCUP will become an extension of campus.

“[We want to offer] a space where young adults really feel that this is a space that is their own,” Otto said. “and [we] are open to working with students to make it more so.”