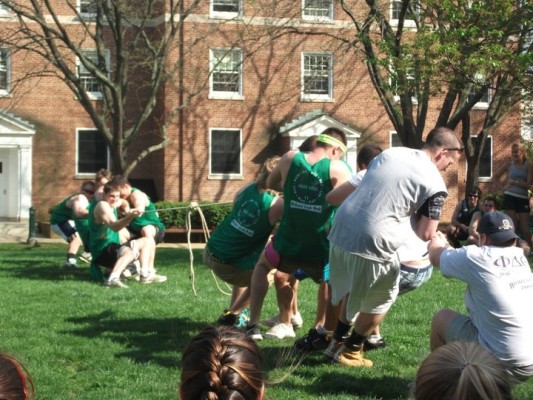 Going Greek is a great way to meet new people, form lasting friendships, and help make college a home away from home. McDaniel College offers a variety of Greek organizations for students to choose from. This assortment of different group personalities makes it easier for a student to find an organization that is right for him or her.

McDaniel currently has four sororities on campus; Phi Mu, Phi Sigma Sigma, Phi Alpha Mu, and Alpha Sigma Tau. Phi Mu and Phi Sigma Sigma are both national sororities, which means they have chapters at universities all over the U.S. Alpha Sigma Tau is also a national sorority, however, they are currently classified as a colony and hoping to be a charter sorority later this year. Phi Alpha Mu is a local sorority, which means it only has a chapter on McDaniel’s campus.

For the men, McDaniel has five fraternities to choose from. Alpha Gamma Tau, Alpha Sigma Phi, Phi Kappa Sigma, Kappa Delta Ro, and Phi Delta Theta. Alpha Gamma Tau is the only local fraternity and is also the smallest.

All students must either have completed one semester (or 12 credit hours) at McDaniel or be a transfer student from another college before they’re eligible to join a social Greek organization. Additionally, the college mandates that male and female students must have a minimum GPA of a 2.5 for the previous semester and overall; although individual organizations may have higher GPA requirements for membership.

In the Spring, female students interested in Greek life can go through a formal recruitment process. To begin this process, they sign up online and are taken in groups to all the sororities by Panhellenic delegates. After two nights of meeting all the sororities, the interested women (called Potential New Members or PNMs) are invited back to certain sororities’ final two events. Then they are finally given an invitation to join, or a “bid,” at the end of the process.

In the past, this has been the process for both semesters, but this fall the recruiting system has changed. This fall, a new informal recruitment process is starting. In this process, PNMs can be taken on individual “dates” with sisters, or attend a typically sisters only sorority event and be eligible to receive a bid to that organization.

Men, on the other hand, use the same recruitment process for both semesters. Each fraternity has one event open to all men, and a second event that is invite only. After the second event, men are given invitations to join. Like the women’s informal recruitment, men can choose which events to attend and do not need to meet all fraternities in order to be eligible to receive a bid.

This may seem like a complicated process to join an organization, but members of Greek life think the benefits are well worth the hassle.

“Joining a Greek organization is like joining the greater side of McDaniel. Everyone in Greek life knows one another, and it always comes down to having mutual respect for all those who are part of it,” said senior member of Phi Delta Theta Alex Deily.

Junior member of Phi Sigma Sigma Megan Rogers said she loves “being a part of the tradition on campus and having an amazing support group.”

Students interested in being a part of Greek life should keep an eye out for recruitment announcements in campus wide emails or stop by the Office of Student Engagement for more information.

NOTE: Corrections have been made to the fourth paragraph of this article.

9 Comments on "Thinking of Going Greek?"