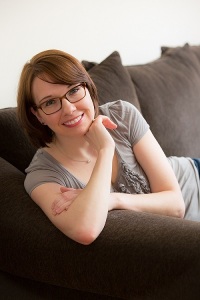 Lisa Van Allen has been writing stories since she learned how to hold a pencil. Even before that, she would tell stories “to anyone who would listen,” she says.

“I remember being horrified the day I realized that all the ‘stories’ I was telling during show and tell in kindergarten actually counted as lies,” Van Allen says.

Van Allen, an accomplished alumna of the McDaniel College class of 2002, has published six novels since her time on the Hill. Her latest novel, The Night Garden, was released on Oct. 7. She describes The Night Garden as “magical realism.”

It is “the story of a young woman who owns an enchanted garden maze in the Catskills near the site of Woodstock,” Van Allen explains. “The heroine has a whopper of a secret that forces her to keep the world at arm’s length.”

“I guess they’re themes that are close to my heart,” she says.

The Wishing Thread, the first novel written under her pen name “Lisa Van Allen,” is a book about strained sisterly relationships, a mysterious old house and rumors of the witches who live there – the “magical realism” component, as Van Allen describes. Van Allen masterfully incorporates details of knitting into the story, as the sisters have been known to knit spells into the garments they make, to the skepticism of some characters and the delight of others.

Van Allen is a knitter herself, explaining that her aunt insisted she learn to knit even though she thought she would hate it.

Her aunt was right to make her learn it, though, Van Allen says. “It’s challenging and it keeps me from having to sit still.”

Knitting is far from Van Allen’s only inspiration.

“I owe an incredible debt to my mother and my husband,” she says. “My mom was a single parent, and she’s the toughest woman I know. Even though there were many careers that would have been ‘safer’ than being a novelist, she always truly encouraged me to keep following my path. My mother was letting me skip work on Friday afternoons when I was young so I could spend some time alone writing, even though money was tight… My income as a writer was and is unreliable, and that makes for a lot of stress. But not for a second did [my husband] ever say, ‘time to go get a real job.’ In fact, when I’ve been on the brink of giving up, he was there to say don’t.”

Another source of inspiration while writing The Wishing Thread was Van Allen’s hedgehog, Cleo.

“She was a big help when I was writing about the sisters’ pet hedgehog in that story,” Van Allen says.

Van Allen grew up in northern New Jersey with her brother and sister. She attended McDaniel mainly because of the “generous” scholarships  she received. An English major with minors in writing and journalism, Van Allen “adored” these classes and “would sit in on them again in a heartbeat” if possible.

Van Allen is particularly fond of the “warmth” that she felt when attending McDaniel. What she loves most about McDaniel is the sensibility, which has stayed the same over the years.

“The professors take an individual interest in every student – I knew it then and I still hear it in talking to them now. I didn’t understand how precious that really was until after I graduated and came home to realize that not all of my old high school friends had such a personalized college experience.”

Van Allen also talks about what has changed since her days in college: “I got my first email account in college, primarily so I could trade emails in NJ with my boyfriend. And I used to be in the computer lab writing to him until it closed. So the technology’s changed a lot!” she says.

During college, she wrote “everything from poetry to romance novels.” She experimented with different genres, styles and voices to find what suited her most.

“My writing is always changing,” she says, “so that by the time one book hits the shelves, I already feel like it was written by someone else.”

Van Allen actually wrote a novel at the same time she worked on her senior seminar project.

“I think I was mentally working on my senior sem for years before I actually wrote it, so believe it or not, I found it didn’t take a huge amount of time!” she explains.

After her years at McDaniel, she worked at a literary agency for a time before realizing she wanted to go back to focusing on her writing.

“Then I went back to school for my MFA from Fairleigh Dickinson University,” she says. “While I was earning that degree, I saw my first book deal with Hachette Book Group, back then it was called Time Warner. My first books were romances/romantic women’s fiction novels published under the pen name Lisa Dale, and I changed my pen name when I changed my style and angle to focus more on magic realism.”

Van Allen has stayed true to her desire to write. In college, she “dragged [her] feet a little” over the decision to try to become a professional novelist. She wanted to find what she thought would be “a steadier way to make [her] love of the written word pay the bills,” and she worked in the publishing industry for a time. But eventually, she knew that she had to try to make her original dream come true – and she did.

“There are so many different ways to be a writer,” she says. “Find a way to write that’s going to make you happy. For some people, that means taking big risks as a creative writer. For others, that means finding practical applications for the key skills good writers must have.”

You can read more about Lisa van Allen and purchase her books at her website: www.writerlisavanallen.com

Green Terror gets a makeover