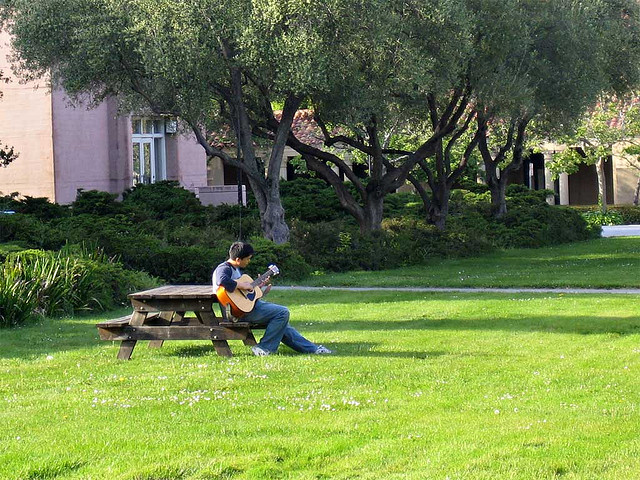 Image by Eric Chan via www.flickr.com

Sophomore Gary Strums took advantage of the warm weather last Friday and sat beneath a tree near Red Square shortly after 1 p.m.

“I don’t have classes on Fridays, so my weekend’s already started,” he explained with a grin.

Two other students, sophomore Susan Noel and junior Liam Smith had already been sitting under the tree, both reading for their next class at 2:20 p.m. “He just came over and plopped down,” said Noel, “That’s when I noticed he had a guitar with him…. And then he started playing that song.”

After the first three renditions of the 1995 Oasis hit, Smith began calling for help. His screams were ignored.

“I didn’t know what else to do! He made tuning his guitar into a huge ordeal and now it sounds even worse,” Smith recalled, wiping a tear from the corner of his eye.

“Yaknow, he has all those Grateful Dead stickers it. Do you think he even listens to them?” wondered Noel aloud.

For his fourth rendition, Strums thought he might “mix it up a little bit, ya feel?” Instead of just tapping his foot along, Strums played percussion between chords on the body of the instrument. He also sung the refrain in a scratchy falsetto.

It was at this point the other students relinquished their place beneath the tree.“It’s just not worth it,” cried Noel, “Just take the freaking tree! Just take it. Come on, Liam, let’s go to class.”

The pair were later seen in the back of a classroom in Hill Hall, wide-eyed. Witnesses claim that halfway through the class, Smith began humming a familiar melody before bursting into tears.

Strum’s fifth rendition of the crowd favorite was played for an empty arena—Red Square had been deserted.

“It’s still nice, though. I feel at one with nature out here. I’m playin’ for the trees, brah. It’s peaceful as hell,” Strums explained.

However, he soon left in the direction of the quad, guitar in hand.