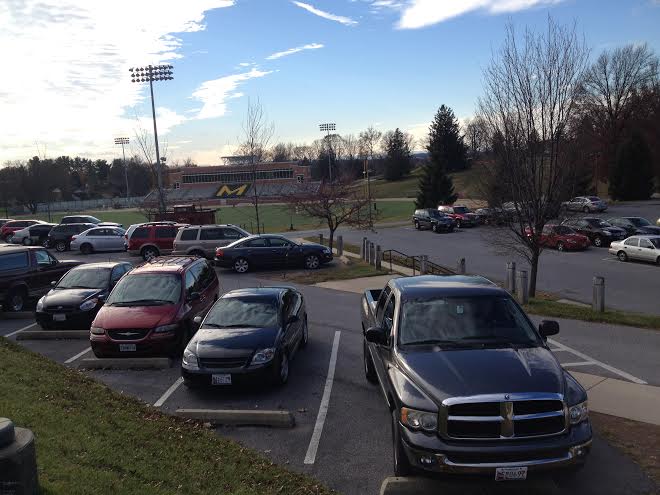 Senior Chet Chetterson has set a new record for the college; he has spent the past eight days almost exclusively driving through campus parking lots in search of an open space. At 10 mph, Chetterson has accumulated almost 2,000 miles driving behind Whiteford, down PA Avenue, up to Rouzer, past North Village, by the stadium, and back around again.

This reporter jogged alongside the car to interview its exhausted driver.

When asked what promoted this record-setting feat, Chetterson groaned. “Well, it’s not by choice if that’s what you’re saying,” he explained. “I just had to run to Target real quick. When I got back, all the spaces were gone! Every time I see an open space in the distance, some jerk gets there right before I do.”

Three days ago, Chetterson did spot an open space. “It was beautiful,” he recalls. The cars on either side, however, had parked straddling the painted line between two spaces. “I’m gonna be real with you — I cried.”

Several practical issues have made this Olympic-worthy test of endurance more challenging. “Sometimes I stop circling long enough to make it to the Chic-fil-a drive-thru,” he explains, pointing to the mountain of crumpled paper bags and wrappers in the back seat. He sighs, “My bank account is empty now. I’ve spent every cent on gas and fast food.”

This reporter was too out of breath to continue the interview. Chetterson continued on, his Prius puttering along at 10 mph. His cries grew distant as he turned onto PA Avenue: “When will it end? When will the madness end?”

Student complains about assignment, had ample time to finish it over break