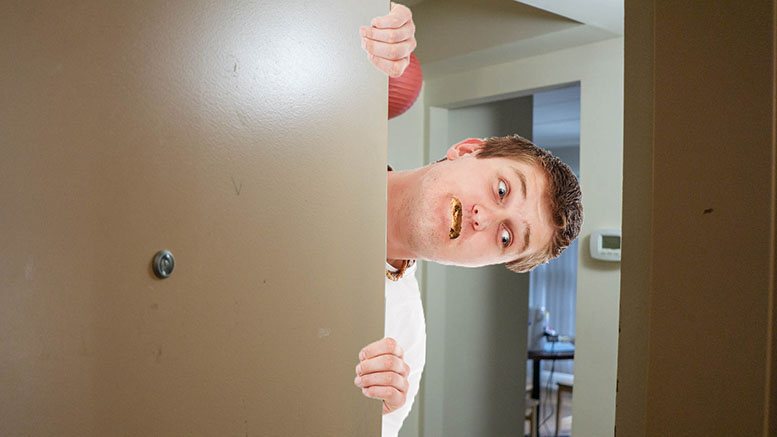 Mousi anxiously peeks out of his apartment with a cookie in his mouth.

“I just like the idea of giving back, you know,” said senior Stephen Mousi.

Mousi’s RA was conducting apartment checks in Garden Apartments when something stood out. In an otherwise badly decorated apartment, there sat a well-plated, scrumptious pile of cookies, accompanied by a glass of milk.

“They were chocolate chip. How did he know those are my favorite?” said Mousi’s RA Eenesh Calber.

“I spent a weekend going around to stores to decide which cookies were the right kind to buy,” added Mousi. “I knew that any cookies I made myself would be horrible.”

When Mousi found just the right cookies, he knew he couldn’t stop there.

“I had to provide a beverage – it’s only right,” said Mousi. Milk became the obvious choice – Mousi, though for some reason preferring skim, bought his first-ever gallon of whole milk for his dear RA. “You know, it’s the small details that make the ensemble,” added Mousi.

Calber was thrown off by the gesture at first. “I actually didn’t notice the cookies at first. I was distracted and disturbed by the collage of Roger Casey’s face Photoshopped onto female models in pin-up poses on the fridge,” he reported. However, when Calber continued his inspection, the offering was noticed. “I thought, ‘Wow, these people are actual idiots,’ until I realized the cookies were for me, then I just felt uncomfortable,” stated Calber.

Evidence suggests that Calber was, in fact, pleased by the gesture. An RA who was nearby recalls hearing high-pitched shrieking coming from the apartment, despite its residents having left.

In the end, though, college policy prevailed. Calber stated, “I didn’t eat any of the cookies, but I did have to take note of the fact that they left perishables out in their apartment, not to mention the contents of their fridge. Oh boy.”

“I was surprised to get in trouble for my kindness,” said Mousi. “But in the end, I have no regrets. McDaniel is a place full of kind gestures, friendliness, warmth and love. I’m just a part of it.”

Mousi reportedly ate all of the cookies, though stale, upon his return to campus.