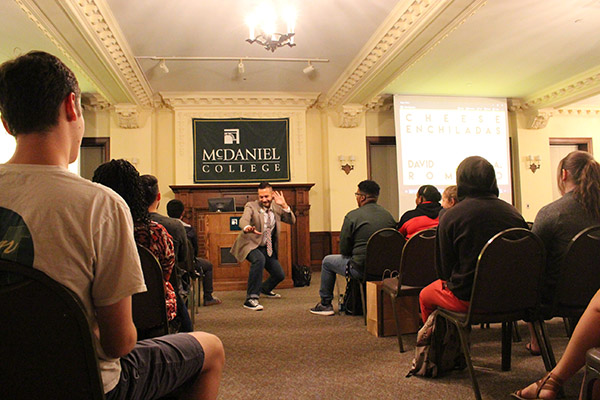 The Hispanic-Latino Alliance, in collaboration with the Office of Student Diversity & Inclusion, hosted spoken word artist David A. Romero on the evening of Sept. 27 in McDaniel Lounge. Romero brought the audience an evening full of laughter, awe, and information.

The event began with the performance of the poem “Undocumented Football,” a poem inspired by and dedicated to a student Romero had previously met. The play-in-words of the poem simulated the plays of a real football match and made the poem come closer to its subject matter. 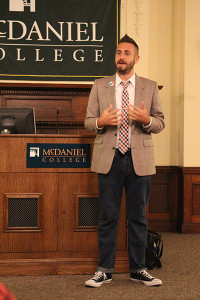 After the poem, Romero proceeded to outline the widespread struggles of the Latino population in the United States, putting an emphasis on its current growth.

This was followed with the reading of the poem “Letters Across Borders,” a poem comparing the relationship of Israel and Palestine with that of the United States and Mexico. In the forms of back-and-forth letters, the poem personified the countries and their relationships and made them more touching to the audience, adding just about the right amount of realism to make it effective.

Romero then moved to define the reasons for immigration from Latin America to the United States. In this section of his presentation, he outline five major causes of immigration: lack of jobs in home countries, political coups, civil wars, consequences of trade policies, and drug wars.

Keeping the audience interested, Romero proceeded to explain the rise of the Latino market in the U.S., but not before explaining the difference between the terms “Hispanic” and “Latino.” As he explained it, the term “Hispanic” derives from the Latin word Hispania, meaning “Spaniard” or “from Spain,” whereas the term “Latino” derived shortly after the wars of independences and defines all the lands south of the U.S.-Mexico border.

The Latino market in the U.S., as Romero explains, is born from a period of oppression and repression of Latin Americans in the U.S. As proof of the growing Latino market in the country, he brings the example of salsa, and how salsa has outsold ketchup over the last couple years, proof that this market is strong and ever-growing. 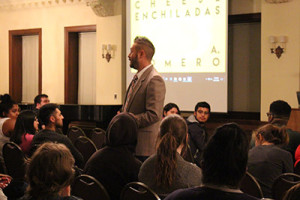 He further explained that the growth of the Latino market is most prominently seen in mass media outlets such as newspapers and TV. Newspapers such as La Prensa, the first newspaper printed completely in Spanish in the U.S., and TV broadcast companies such as Televisa, Univision, and Telemundo, originate to satisfy a demand from the Latino population.

Lastly, in regards to the Latino market, Romero remarks a shift of marketing within this demographic. This shift, as he points out, moves from the family values of Latino families to a more diverse and modern view of Latinos in the U.S.

After this thorough explanation, Romero performed “Cheese Enchiladas,” a very dynamic and energetic poem with lots of audience participation. Although the public wasn’t as hyped at the beginning, they shiftly became more enthusiastic, sharing the same levels of passion as Romero himself.

Romero followed this excellent performance with a quick walkthrough of the rise of the Latino electorate. In this section, Romero put an emphasis on the 2008 presidential elections and what made this elections stands: the swing states. As he remarked, the increasing Latino population of the U.S. is forming more and more swing states, especially on states that once aligned with the Republican right.

He also points out Jed Bush’s strategy to gain the Latino vote during the Republican primary elections. This strategy basically consisted on campaigning in Spanish in order to appear more inclusive and gain the favor of the Latino voting body. 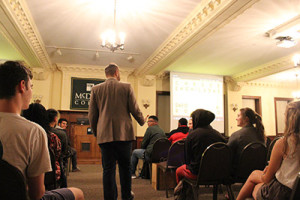 This was of course followed by the question of who really stands with the Latin@ Giant (a term coined by Romero himself), a section where Romero pointed out the Latin@ Giant’s biggest allies: The Phillipino population, the Black panthers, among others.

In order to emphasize the network of support for the Latin@ Giant, Romero performed “Black and Brown Fight Tonight,” a poem about Black and Brown violence and unity.

Of course, the night would not be complete without mentioning the major opposers of the Latin@ Giant, which include Lou Holtz, Joe Arpio, Chris Simcox, and Donald Trump—the latter being the subject of Romero’s poem “Open Letter to Donald Trump.”

The event ended with some suggested reading by Romero, among which are The Devil’s Highway, by Luis Alberto Urrea, and Open Veins of Latin America, by Eduardo Galeano.