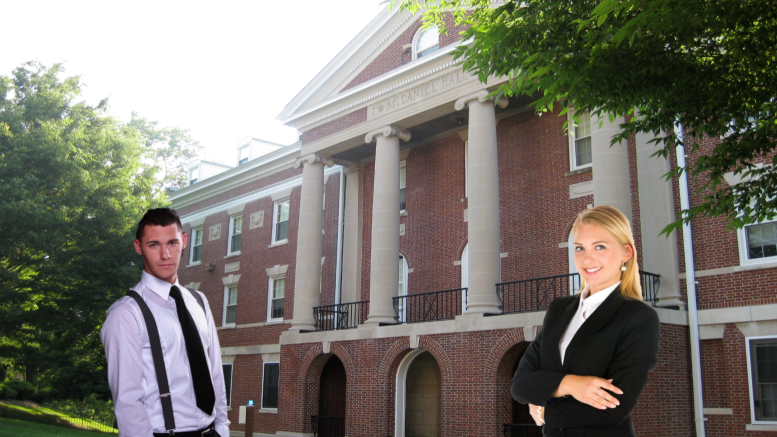 Some of McDaniel's wealthier students have been humbled since living in McDaniel Hall.

A new wave of housing woes has fallen upon select residents of McDaniel Hall.

Students hailing from wealthy backgrounds have found it hard to live in the residence hall, saying that it has been a challenging, humbling experience for them.

“It’s been really hard on me,” said Casey Bass of his life in McDaniel Hall. “I just can’t believe that each resident doesn’t get their own living quarters,” the sophomore said.

Bass, who grew up in Fairfax County, Va., said he is used to his 3,000-square-foot suburban home where he and his three siblings enjoy their own bedrooms, bath areas, and full-service food space. The sophomore’s transition to residence life at college has been challenging the last few years.

“It didn’t really hit me until move-in day just how third-world college dorms were going to be. I almost had my mom drive me back home but some helpers had already taken my belongings to my room in Rouzer,” Bass recalled of his first-year move-in experience.

Bass attributed his suffering in his first-year on campus due to the typical rundown style of first-year dorms, but expected that his sophomore living arrangements would be closer to his family’s standard.

“We’ve always had a nice place to live, ever since my great ancestors had the estate built for us back in the day,” Bass said with a reminiscent smile.

But life in McDaniel Hall – one of the college’s notoriously rundown buildings – hasn’t been a step up from first-year living for Bass. Between living on the third floor, sharing a room with another resident, and having to take more than ten steps to get to a bathroom, the experience has been all but enjoyable for Bass.

He said that his first week in McDaniel Hall gave him the same shock as his first-year experience, but once he settled in, it wasn’t all that bad.

“I learned how to deal with the difficulties that life presents to us,” Bass admitted. “If it means waking up an extra five minutes to make the trek down to the bathroom then that’s what I’ll do, it’s all anyone can do.”

The business administration major said that this less-than-ideal living situation has led him to reflect on the world we live in and the different realities that we all live. Since moving into McDaniel Hall last August, Bass said that he’s become good acquaintances with the students on his floor. Hearing their backgrounds and stories from home has helped open his world to an entirely new array of lifestyles.

“At first I was insulted that the college had given me such poor living conditions, but then it really hit me that some people live like this every day. It’s been a really humbling experience.”

While humbling for those like Bass, other students haven’t taken so well to life in McDaniel Hall.

Sophomore Becky Vanderbilt transferred to Johns Hopkins over the winter break after finding her living conditions in McDaniel to be too unbearable during the fall semester. While not the ideal outcome for her situation, Vanderbilt found switching schools easier than living in what she described as “rodent filth event a mouse wouldn’t go near.”

Obviously pampered by caretakers her entire life, Vanderbilt had trouble appreciating something as simple as a roof over her head and walls to keep the heat in.

“I just had to get out of there,” Vanderbilt said in a phone interview, “It was absolutely unbearable. I’m not sure how anyone could live like that.”

Those in the building who have made it through to the spring semester have mixed memories of Vanderbilt.

“I remember that one,” said one of her floormates, “She was always talking up a storm about how the shower heads didn’t have the same settings as hers back home.”

Bass, who lives one floor above Vanderbilt’s old room, thinks that it’s unfortunate she was unable to have the same experience that he did.

“I think experiencing something as difficult as life in this building is a really great opportunity for us all to grow as who we are – it’s been an integral piece of how I’ve matured this past year.”

Always looking for an opportunity to pat himself on the back, Bass appreciates that he has been able to work so hard to see where others come from and doesn’t mind that he finds himself to be so humbled on a daily basis.

With less than two months left in the year, Bass doesn’t see any reason why he won’t make it through finals week while calling McDaniel Hall home.

“I’ve really found my place here,” he said with a proud smile.

Bass has already received his placement in a Gardens apartment for the upcoming school year where he said he’ll enjoy home-cooked meals and central air conditioning to the fullest extent possible.