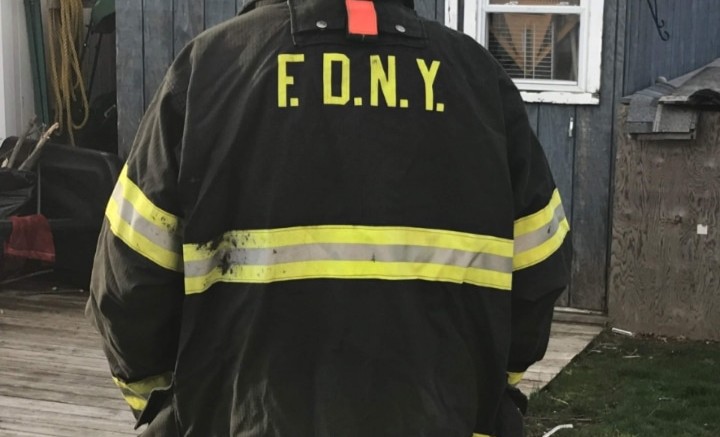 The writer's dad in his turnout coat on the 19th anniversary of the September 11th attacks. He was working that day in the city with FDNY. (Photo Courtesy of Peter Cornell)

Two weeks ago, Friday Sept. 11th marked the nineteenth anniversary of the horrible terrorist attacks on the United States of America. I sat down with Bernie Cornell, a retired member of the FDNY, to discuss how first responders are still being affected by the deadly attacks to this day. At the time, he was only a firefighter.

On that Tuesday morning in 2001, he was working in Woodside Queens with Engine 325 and Ladder Company 163. That day he was a chauffeur for the engine company. He said, “We got our ticket to go to the call at 9:02.”

On that day he said, “You’re going in like a task force going into the towers. We were the first ones to the Midtown tunnel from Queens, ready to go in.” His company was ready to go to the towers to try and save as many lives as possible, as they were trained to do.

When they finally arrived at the scene the South Tower had already collapsed. They were only one and half blocks away when the North Tower began to collapse.

After everything settled, he said “Everything got quiet. With so much debris from the towers it looked like a blanket of snow on the ground. The snow muffled the sound of anything being moved around. An ambulance would come down, and all you could hear was the snow chains on the tires.”

Cornell ended up working two months down at the pit, which is what they called ground zero. They weren’t worried about the toxins in the air because Christine Whitman, who oversees the Environmental Protection Agency, said that the air was safe to breath and no one should worry. According to ABC News, twenty-seven former New York City firefighters have died of 9/11 related illnesses in the past year alone, bringing the total to two hundred and twenty-seven since the attacks.

That day took a toll on families as well. Cornell’s wife Annemarie was pregnant with their first child. That child was me. The next day she had a doctor’s appointment and wasn’t sure if Cornell was going to be there because she had only talked to him once that day after he borrowed someone’s phone because cellphones weren’t popular then.

In the coming years people who were at the towers that day started becoming sick with various illnesses and the first responders started getting cancers. First Responders didn’t start to hear anything about illnesses until five years later.

Cornell said, “Doctors knew that at the 10-year point is when everyone would start to get sick.” When asked if he was worried about getting sick, he said, “He wasn’t worried about it because he felt fine and it never came across his mind.”

I then asked if the city should’ve handled the response differently. Cornell said, “The city shouldn’t have handled it differently and they did exactly what they were supposed to do.” Cornell would end up being diagnosed with thyroid cancer after a routine doctor’s visit. The cancer didn’t pop up until 7 years after the attacks.

Congress recently passed a bill that will ensure all 9/11 Victims a Compensation Fund that will never run out of money. Jon Stewart, actor and now activist, was a big advocate in getting this bill passed. He worked side by side with first responders to get this bill passed so their efforts on that day are still recognized. If it wasn’t for him, Congress would have let the bill run out of money and would have left first responders on their own to pay for their own medical bills.

Cornell said, “John Stewart was putting their feet to the fire otherwise we would have been forgotten about”.

First responders that were there that day are still suffering from the long-term effects of the attack, and they are still being diagnosed with illnesses or cancer that can be traced back to that horrific day.  The attack is still affecting people to this day and it shouldn’t go unnoticed.